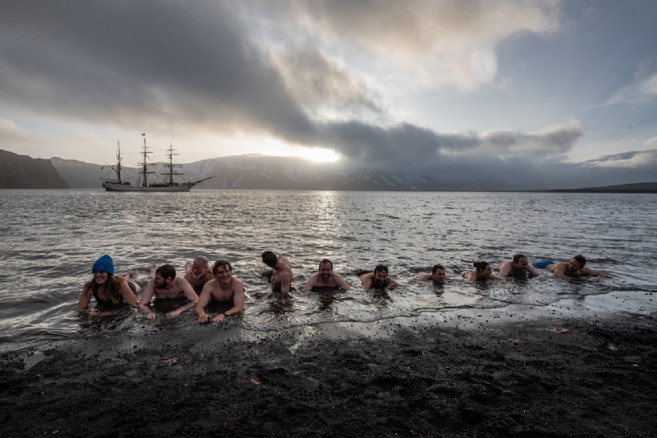 Early exploration enterprises in search of the coveted southernmost lands dealt already with the stretch of exposed open waters between the South Shetland Islands and the Antarctic Peninsula. Named after Edward Bransfield, who back in 1820 confirmed the reports of islands spotted a year before by the merchant sailor William Smith. Discovery followed soon by a large-scale commercial sealing and whaling in those waters. Many of their vessels ventured in the new and uncharted icy seas, contributing to the finding of many other Antarctic lands.

Bransfield stands as an important figure in the Antarctic history, playing an essential role as a Captain on voyages of discovery and surveying the South Shetlands and the Antarctic Continent. Journeys of struggle, failures and success aboard classical wooden sailing boats, facing the frequent storms and seldom calms, swells, the capricious and temperamental cold weather that characterises these waters. Meteorological conditions that haven’t changed in the present times as much as they have the technological developments that help the sailing, and the knowledge of the oceans through pretty accurate forecasts, maps and charts. Time scales have greatly changed too, nowadays a well planned and scheduled trip lasting a handful days or weeks is considered a long one, while about a century ago the sailing adventures on those latitudes could last several months or even years at the time.

New times and ways of travelling that make the wind previsions the most useful tool to work with, being essential on planning trips. Wind forecasts tell us about the present situation and give a good idea of what is to come. Maybe there will be good sailing winds? maybe approaching stormy conditions to avoid? perhaps time to leave an area, move to another one? Yesterday that was precisely their message. A window of relatively calm winds to cross the Bransfield Strait, unfortunately blowing on the nose.

Unlike in the old times when canvas was the only propulsion, on those occasions Europa can rely on her engines to make way. Well over hundred miles of open waters along which swell and wind kept increasing. To the point of blowing with gale force once she reach her destination, the South Shetland Islands. At mid morning, the characteristic jagged cliffs of Fort Point, at the Eastmost tip of the largely glaciated Greenwich Island, stand up with their rough beauty against the boisterous weather.

Wind gusts reaching up to 46kn, cloudy and rainy conditions, all offering a superb first spectacular view of the South Shetlands. Braving those conditions there is not much more to do than change course southwards, leaving the mountains and glaciers of Livingston Island at our Starboard side and try to reach Deception Island soon, seeking and hoping for more shelter and with it, the chance for an evening outing. Between strong gusts, lower staysails are hoisted with the help of many and still running the engines Europa heads towards the volcanic island.

Its ring shaped caldera comes to view in the afternoon, but still a couple of hours left until rounding the island to its southern shores where the only way into the volcanic building is located.

The descriptive name of Deception dates back to at least 1821, with an origin that remains a mystery, though some tried to relate it with several circumstances specific to the island. As an active volcano, its shores are warm, often steaming with sulphurous fumes, feature that creates its own weather frequently hiding the high hills and mountains up to 540m behind a veil of clouds. This characteristics, its location and shape makes it famous for funnelling winds and often foul weather. Furthermore, it is not an easy task to steer the ship through Neptune’s Bellows, the only narrow gate to the inner caldera of the island. Coming into the flooded volcano means sailing close to the cliffs of Cathedral Craggs right on our Starboardside, while on Port large shallows extend to the Southern shores of the entrance. In the middle, the infamous Ravn’s Rock is barely submerged, representing a hazard for navigation, and has already damaged several ships and even sinking some. As a witness to this dangers, the Southern Huntress, wrecked here in 1957 is still showing parts of her bow amongst the orange rocks at the beach.
Along the South-eastern outer coasts of Deception a rocky cape stands out, Baily Head, home for a large Chinstrap Penguin colony, area that stands out in comparison with the more barren inner beaches of the island. Close to them, the conspicuous “Sewing machine needles” stick out of the water, rocky outcrops that the erosion sculpted on such characteristic shapes.

Soon the Europa is making her way inside the volcanic caldera. Not far from the entrance lays the landing site for this evening, Whalers Bay. A good choice of a name for the area, as it was home for the “Hektor” Norwegian Whaling Station. In the past a main hub for the whaling operations in Antarctica, nowadays just its rusty ruins and crumbing buildings remain as a witness of this period. Days that had a devastating effect on the former whale populations, while their blubber rendered into oil lightened streets and lamps, heated houses, oiled machinery and was used in the infantry, pharmaceutical and food industries of the times.

The history of the station started in 1912 and was heavily used until 1931. But that was not yet the end of it; after being reconditioned during WWII it represented one of the selected spots in Antarctica for the English secret “Operation Tabarin”. Such a prominent location then went through a third period of use when the Falkland Island Dependencies (the former British Antarctic Survey) took over some of the buildings refurbishing them as bases for scientific research until 1969. Year when an eruption on the slopes over the flat beach created a hot mud flow that cut right in-between the base. Many buildings, boilers, tanks and whalebones are nowadays partially buried as a result of that.

To explore this haunting beach is where we head ashore straight after an early dinner, first walking to the impressive viewpoint of Neptune’s Window, the saddle that bites the ridge that follows up from the Neptune’s Bellows cliffs. Picturesque location with a background of historical significance for the discovery of Antarctica. It was from here where the story tells about a young sealer, Nathaniel Palmer, having a good and clear day for a good view, confirmed the existence of lands across the Bransfield Strait on the 17th of November 1820. The mountains of the Antarctic Peninsula, that have been first sighted by Bransfield about 10 months earlier though none of the crew members onboard his ship Williams were aware of this significance. By the same time as Bransfield, the Russian Captain Fabian von Bellingshausen spotted Antarctica, now the area East of the Weddell Sea.

At the same time evocative, bewitched and arresting, the station remains where the next area to explore. Whalers Bay doesn’t leave anybody disappointed or unimpressed while walking around photogenic and eerie buildings, corroded oil tanks, boilers and the rest of crumbling and shabby remains of the old whaling enterprise conducted here. Feelings that oppose with the joyful polar plunge that many decided to take before heading back on board.