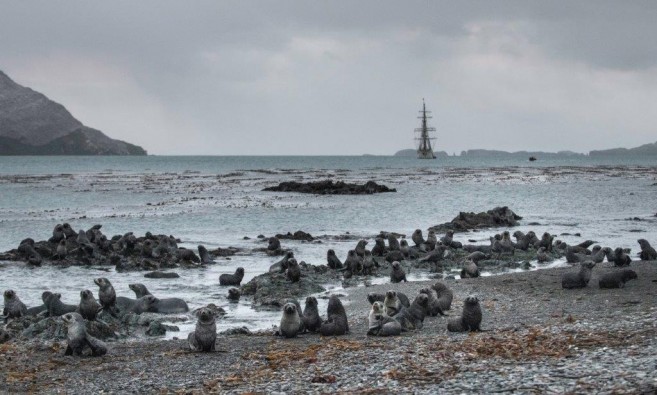 A hard night dealing with stormy conditions led us to the proximity of Right Whale Bay, where we planned our first approach to the island’s coasts. But still, as we wake up, the 40 to 50kn wind blows sweep over our decks and rig, while the crew tie up and tightly furl the canvas and ropes on deck. On that S-ly blustery conditions the best way to stay safe is to hold on under engine out at sea.
Those winds easily create katabatic situations when they whoosh over the island’s high peaks and glaciers plunging down to the coasts. On that occasions it is often windier close to shore than a few miles offshore. A few hours past until the afternoon while Europa slowly moves a few miles Eastwards, then the wind-force seem to ease down and gradually became more W-ly, better direction for the island’s bays to offer some shelter. Time to try our luck and get into Rosita Bay, where we found indeed calmer conditions. Anyway, the unstable weather made for anchoring under 5 shackles. Conditions here rapidly improve and that brings our guides to plan our first landfall in South Georgia for this evening. The remaining time left in the afternoon was for us to enjoy the fantastic documentary “Around the Horn with the Peking”, filmed in 1929 by the, at that time, green-hand sailor Irvin Johnson. Loving his harsh first experience at sea, he then joined the sailor’s career became
later a renown Captain. On that documentary he shows the hardships of the last cargo-sailing vessels (the famous P-liners), on their trading trips from Europe to the Chilean coasts, crossing the Atlantic and rounding Cape Horn on their way. Using large and engine-less tall ships, for many years they faced fierce winds and huge seas, and Irvin was there with his large and heavy camera, being the first one to document this kind of voyages. Many on board are also documenting our trip, using digital and much lighter equipment than in the past, on the smaller and modern equipped Europa. But still, facing as well oceanic waters all over the world in her long life since built in 1911.
After our evening meal, variable strong winds were still present at Rosita Harbour but blowing more steadily at a maximum of 25 to 30kn. However, with the ship located quite close to shore on flat seas we give the landing a try. Already now, although we are recently arrived to South Georgia, we know that chances for visits ashore must be taken at whatever time they become possible. Despite the dusk dimming light, it feels great to set foot ashore after the last week at sea. All around the landingsite what seems to be thousands of Fur seal pups welcome us. Showing interest mixed with apprehension, as soon as we stay quiet and calmly observe them myriads of them approach to inspect the new arrivals to their beach. Just sudden movements could scare them away a few meters before they stop and try again to approach. Almost independent, they still need frequent visits of their mothers. Some of them can also be seen around. Gradually they spend more and more time feeding and offshore, until eventually they don’t return to the beach when they consider the pup is a grown-up seal capable for itself. Just walking slightly to the upper part of the coast, where the beach ends and the slopes covered by greenery begin, we can all realize the effect the Fur seals have on the Tussock grass. An estimated number of about 3 to 4 millions of them snooze on the tussock stools, compressing them under their weight, leaving the middle bare and surrounded by a sort of crown of leaves. With this effect, the burrowing birds like many petrels cannot build their nests easily.
As quickly it was becoming darker and darker, we were making our way between the two long beaches of Rosita, both crowded with Fur seal pups, and even a handful of King penguins and Gentoos were wandering around between them. And soon, two of the most interesting bird species of the island showed up, the subspecies of Pintal duck that lives in the island and the endemic South Georgia Pipit Those ones, maybe not so big and graceful like the albatrosses, but they are the only nesting songbird in South Georgia and due to its isolation in the island from remote times, it became a species that can only be seen here. In the past their populations were heavily affected by the presence of rodents, but thanks to the successful rat eradication plans conducted in the island during the last years, now their population is greatly increasing, together with many other birds that now live without the rat thread. Rosita Harbour is seldom visited for other tourist ships which they come
here very occasionally but is a regular landing and anchorage for the Europa. As it is also a preferred place for Fur seals to breed. Taking the best of the remaining daylight we could manage, we greatly enjoyed the first close encounter with the delightful and inquisitive Fur seal pups down at the beach. The place also offers one of the few sites where penguins don’t nest, and with all, gives a different perspective of South Georgia than other sites, helpful to put together a full picture of this amazing island, that sure will gradually unfold for us during the next days.

At our background, the rounded hills made up of now consolidated loose moraine materials lay at witness of the glacial past of the area, when during the last glacial period vast glaciers were covering Rosita, carving the valleys and the whole bay. At the present they have retrieved far up the high mountains we can see all around. Views that soon became obscured by the night darkness while the zodiacs make their way to pick us up. From then on Europa lays under 5 shackles of anchor, holding ground despite dragging a bit overnight under gusty winds once more.