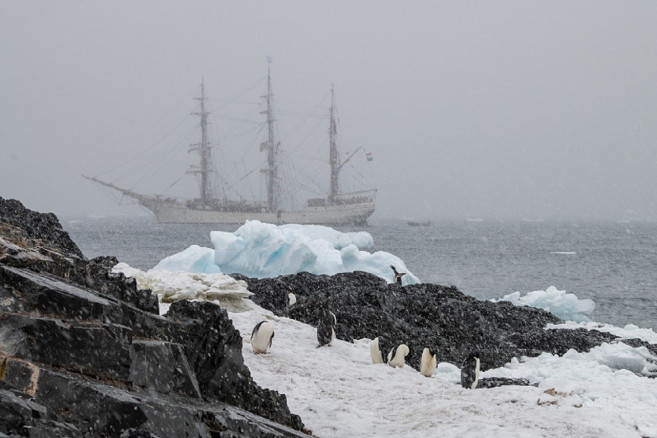 A sailing day in the cold fog.The last day at sea after we departed from South Georgia about 11 days ago. A summary of the last hours experiences talks about the damp and cold watches on deck, low visibility, now and then a supposed sighting of land veiled by the mist, often a report of icebergs closeby hiding behind the thick low clouds, repeatedly the Europa cross bands brash ice on her way to the Antarctic Sound.

Sails take the fair winds until the afternoon, when getting closer to land it was time to douse and furl them all. Soon
in-between rain and snowfall gusts, high cliffs, glaciated slopes and mountainous lands come to sight. With the Europa drifting close to the shallows and stranded icebergs off the West shores of Joinville Island and readying the ship for an evening landing, one could fall in the trap of thinking that busy days on deck, sailhandling, cold watches, icy conditions and all the hardships from the last days were to be the last ones before reaching Antarctica and set foot ashore. But the temperamental Antarctic weather has nothing to envy to the stormy Scotia Sea.

Ideally we would set foot ashore straight away on arrival. Weather forecast for the following days let’s say that would advise to do so. Like that, in the wet, cold and grey weather, while it keeps snowing, after an early dinner we all make way in the zodiacs for our first landfall in Antarctica.

A channel between the rocks of Madder Cliffs give access ashore. High steep rock walls surround the neighbour Kinnes Cove, a picturesque small bay of Joinville Island (the largest of the archipelago that also includes D’Urville and Dundee), which was discovered as soon as 1838 by the French expedition under Captain Jules Dumont d'Urville, who named it for François Ferdinand Phlippe Louis Marie, Prince de Joinville (1818-1900), the third son of the Duc d'Orléans.

To the West, the mainland Antarctic Peninsula, inbetween, the Antarctic Sound, and above us the building up of stormy conditions. Nevertheless, as long as ice, weather and sea conditions show a slight possibility for us to stretch a bit our legs for the first time since leaving South Georgia, we are going to take it. Nobody said that sailing and landing in Antarctica was an easy deal, and today, the real feeling of Antarctic conditions made for a remarkable couple of hours ashore.

Increasing snowfall driven by strong winds and reduced visibility didn’t stop us to have our first contact with Gentoo and Adelie penguins, that seem to carpet the lower slopes of the high hills and cliffs behind. Adelie seem to prefer the higher slopes while the Gentoos, many of them already busy taking care and feeding their chicks, prefer the less adventurous lower banks.
A good passage between rookeries led us uphill to a vantage point over the rocky coast and Joinville Island ice cap, as the whole island is almost completely glaciated. The worsening weather conditions and the increasing amount of bergy bits and icebergs drifting close, makes for the ship to manoeuvre and brave the blizzard-like circumstances before the boats start their way ashore to pick us up. Now, the narrows amongst rocks where we landed a couple of hours ago are packed with heavy brash ice. Not many other places where to operate zodiacs are around, so its time to put up with weather and ice and take it for a sort of adventurous zodiac ride.

Back aboard, we find an Europa making way to the more open waters of the Antarctic Sound, against the wind with snowy slippery decks, icicles starting to grow here and there on the rig, and frozen coils on the pinrails.