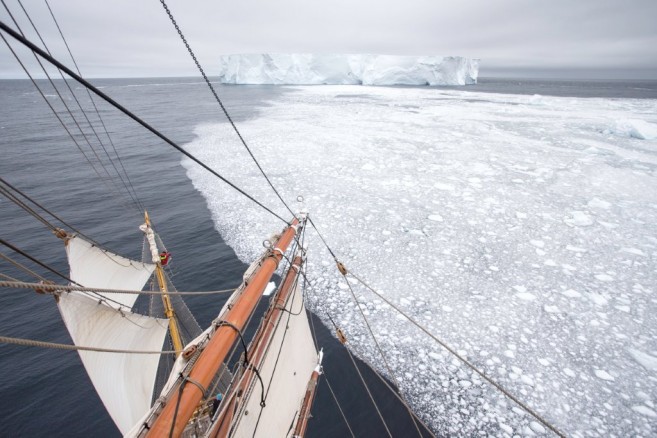 On January 5, 1841, a British Admiralty expedition led by James Clark Ross were trying to sail both their ice-strengthened three-masted ships, named Erebus and Terror, through the pack ice off the Pacific coast of Antarctica.

They were trying to determine the position of the South Magnetic Pole. On 11 January, the expedition came to halt in front of an enormous wall of ice. Ross called it the Victoria Barrier, but it is now known as the Ross Ice Shelf. Late afternoon on March 9th, in the North-western corner of the Weddell Sea, more specifically in the Erebus & Terror Gulf -- which is named after those two ships -- we reached a fragment of one of the world’s largest icebergs ever recorded. B-15Y is a "small" portion of what started in March 2000 as B-15 with an area of 31000km2, slightly larger than the size of Belgium. B-15Y is still a respectable 11 x 4 nautical miles, an area of roughly 160 km2. At that size it is still quite an impressive sight. This particular chunk travelled on the Antarctic coastal counter current, all the way from the Ross Ice Shelf in the Ross Sea, to where we found it. The trip in counter clockwise direction around the Antarctic continent took 15 years and roughly 6500 nautical miles. That's an average speed of only 0.04 knots, so it probably made some stops and detours. Alongside, we halted our slow progress through the pack ice and spent the night drifting in the open water next to B-15Y.