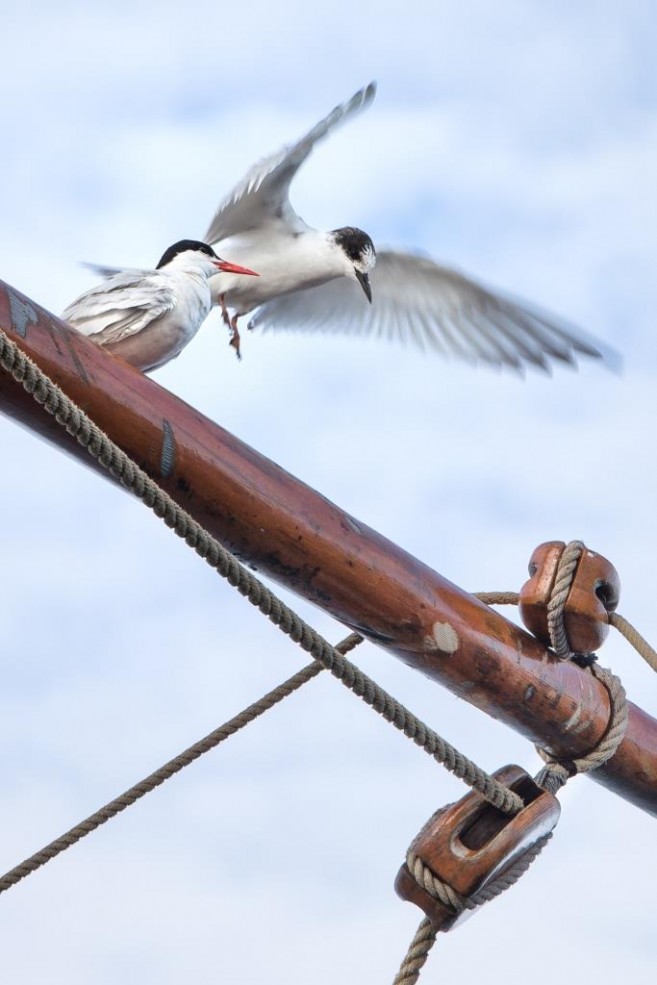 We were welcomed to a beautiful morning; fair winds and following seas, on our fresh start sailing southwards.

We were welcomed to a beautiful morning; fair winds and following seas, on our fresh start sailing southwards. At breakfast time the wind was blowing between 18 to 20 knots from 340º, as we sailed on a SSW-ly course at 6 knots, passing by Bahía Blanca latitude. Almost all our canvas is set but Studding sails, but with the wind almost from the aft, everything is ready to set them later on. And in fact during the morning we set the Lower and Upper* ones on Starboard side.

Soon we cross again the 40º latitude, but this time we get a much warmer welcome, sailing in good conditions, good weather and sunshine. We sail with on our Western horizon big cumulus cauliflower clouds, an indication of unstable air, hoping that it is not crossing our course, if so, probably will bring some showers, and in fact during the night we can see some lighting, luckily in the horizon. At least for today we avoid this frontal system.

As the day goes it gets cloudier and the wind picks up to 25 knots, veering to 15º (NNE), the Studding sails are stowed away, and in the head rig we just keep the Outer jib, sailing with tail winds on a 220º course reaching even 9 knots of speed. It looks like, since we are sailing closer to land, we don’t feel so much the effects of the Falklands Current flowing Northwards.

Today we also discovered a tear on the Fore skysail, so better unbent it and bring it down for repair before the gash gets larger. After diner, during sunset, Krista is busy up the rigging bringing the sail down and during the night the stitching sessions continue in the library.

On our traditional 2 o’clockie meeting, Klaas gave us information about our friends evacuated from the ship in Mar del Plata, both are well attended in the same hospital, Wim Bolk luckily has no broken bone in his leg, but is still limited on his movements. And Wim de Ridder is still under observation. We hope both have a safe and quick trip back home, and prompt recovery.

Our Captain also tells us about the daily progress, from our start 22 hours ago from Mar del Plata, we have sailed 126 nm, at an average of 5.7 knots. During the afternoon we are South of our southernmost position, before we had to head North for the medical evacuation, and soon we will reach the 42º S close to Peninsula Valdes, considered the beginning of the Argentinean Patagonia.

As we sail in quite windy conditions, up to 25 knots even if it does not feel like as we sail with the wind in the aft and the low swell from approximately the same direction, seabirds are present again around the ship. Numerous Northern giant, Cape and Wilson storm petrels fly around together with several Black browed albatrosses. Its impressive to see how they use the disturbances we make on the wind patterns with our sails for their benefit gliding over the waves, gaining height and sped getting close to the Studding sails, and shooting down again on their majestic flight over the ocean. Also we had a couple of visitors in the rigging, an adult and a year old youngster of the beautiful South American terns used the booms to have a rest and clean their plumage before going back to sea.