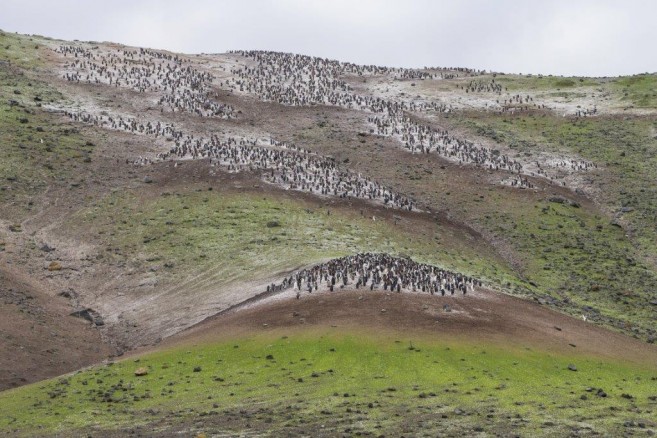 Waking up from a comfortable night at anchor at the southern shores of Livingston Island, Europa sets sails before dawn, and start making her way, using almost all her canvas and one of her engines, helping to keep enough speed to reach the Neptune’s Bellows (entrance of Deception Island caldera). At sunrise the low clouds cover its highest hills, but still leaving the sun break through now and then and permitting great views of the outer coasts of Deception, the volcanic ring-shaped island measuring 8nm in diameter, with a narrow entrance into the central landlocked harbour of Port Foster. “Deception” curious name dates back to at least 1821, with an origin that remains a mystery, though some tried to relate it with several circumstances specific to the island. Is difficult to find and then enter steering through its only narrow gate, avoiding the submerged rocks of the southern shores. Then it seems like the island creates its own weather. Often covered in clouds, raging winds can funnel through Neptune’s Bellows making Port Foster windier than the open waters outside the island, sometimes not offering the promised shelter that the shape of the caldera could made us think. And last but not least, the fine volcanic gravel that covers all the sea bottom doesn’t give the best holding ground for anchoring.

As it gets closer to breakfast-time, is clear that the weather and sea conditions are pretty special today. Usually big swells crash against the whole steep Eastern coast of Deception, making the landings in this area difficult and most of the times not even possible. But today the relative flat seas made for a great chance to give a try to go ashore at one of the most spectacular landings of the South Shetland Islands, the stunning Baily Head. The situation required a slight change on our plans, but anyway we are already getting use to those schedule changes, besides making our trip more interesting catching up with the opportunities when they pop up, and to flow with the variable wind and weather conditions.

Anchor is dropped close to the volcanic gravel beach, framed by the cliffs of the rocky promontory of Baily Head on one side while at its back lays a long glacier front with mixed layer of volcanic ash and ice. Thus indicating several of Deception Island eruptions, that eventually covered with ash and little fragments of lava the growing ice during the last glacial period. Between both, a meltwater stream flows along a wide-open valley giving the appearance of an amphitheater to the whole setting.

While Baily Head represents the East-most point of Deception Island, the extensive glacier that extends along the coast North of it, called Hawkes Glacier, reaches up to the heights of Mount Chile (528m) and Mount Pond (548m), the highest on the island.

Furthermore, the place is home to an incredibly large rookery of Chinstrap penguins. In 1993 100.000 nesting couples where censed here, but with the reported general tendency of this species to decline in numbers, recent estimates give a count of about 60.000 pairs.

With all this unfolding to our eyes as we finish breakfast and step on deck with the first coffee of the day in hand, a scout zodiac is sent to assess the conditions of the landing beach, not to be trusted as is famed as difficult and at times extremely hazardous. Although long surge and occasionally bigger swell crash against the beach, today it will be possible to land. So, there we go, dressed and packed for an adventurous landfall, and indeed it was, but soon we are all wet but safe at the penguin filled beach. Other furry visitors are all around in hundreds, outnumbering by far our small group of 40 persons. This long coast is a regular haul out for Antarctic fur seals, and now mostly males in numbers of hundreds are having a rest all over the beach. Several areas in Antarctic Peninsula are used to recover themselves and replenish energy after their stressful breeding time in South Georgia or in the smaller colonies scattered over the northern coast of the South Shetlands. Females are still in their breeding grounds taking care of their youngsters.

Countless young inexperienced penguins come and go in tight clutches, waiting for the perfect wave to jump in the water, made for an unforgettable time at the beach and many good pictures. Dealing with the numerous sleepy seals to make our way inland, we soon reach start finding heaps of feathers as we walk, clear indicator that the adult Chinstraps are molting, all grouped around their nesting areas.

Rounding the rocky cliffs of Baily Head we access a wide open space gently sloping to several hills in the background. There, tightly packed colonies are scattered throughout the volcanic landscape, including some of them occupying the higher ridges, making us wonder how come they choose to breed so high up the mountains, far away from the sea.

From Baily Head Europa soon moves the short distance to the Neptune’s Bellows, where we enter into Port Foster by lunchtime. Leaving a vertical and rusty orange colored volcanic cliff close to our Starboard side, we leave the shallow called Ravn’s Rock at Port side, features that together represent the landmark to enter into the 5nm long and 3nm wide caldera of Deception Island. Just around the corner we drop anchor at Whalers Bay. On shore, the eye catching remains of the Norwegian “Hector” Whaling station lay, where we plan an afternoon stopover. All the facilities we can see have been through several uses during historical times. Created as a landbase whaling station it became a Navy-military base during the secret English “Tabarin” Operation in the Second World War, and afterwards was part of the research facilities of the British Antarctic Survey, formerly called Falkland Islands Dependencies.

Once we go ashore over the calm waters of the bay, the possibility of a longer hike is offered together with an easier activity strolling around the long beach littered with countless whaling remains and the visit to the ruined whaling station itself.

Many joined the hike, climbing to approximately 300m in height along a barren valley where a meltwater stream flow from the ice covered by volcanic pebbles and mud. The group reached several lookout points over the Bransfield Strait and Port Foster, even having a full view from the distance to this morning landing at Baily Head with the high mountains of Livingston Island shining in the sun at the background. Eventhough at the beginning was planned as a shorter walk, the good weather and fair temperature allowed us to go further up and away than first planned, offering spectacular views and an adventurous descend. The exciting hike ended up at Whaler’s Bay flat open beach located between Neptune’s Bellows cliffs at one side, and the volcanic slopes leading to Kroner Lake at the other, still with time enough to explore the whaling station as well.

Besides the decay produced by the time, abandonment and harsh weather, the constructions where heavily affected by an eruption that happened up the closeby slopes in 1969, but still remain as a witness of the large-scale whale hunt that took place here in the first half of the 20th Century. Antarctic whaling history was divided in two eras, an early one dedicated to rendering oil for illumination and heating, while the second one was more directed to specific industries like lubricants and infantry. The discovery of petroleum and gradually increasing its stocks and uses lead to the decline of the whaling industry. Electricity, from its early finding in 1879, also became increasingly successful, and with both of those discoveries together the price of whale oil dropped and whaling started to become unprofitable for many companies. Just a handful of business survived until the early 30’s when there was a collapse of the industry. From then on very few whaling enterprises subsisted along the Second world war. Actually, Hektor whaling station here in Deception, came to its end in 1931, and nowadays its ruins and numerous arctifacts dispersed all over the place lay as an open-air museum and Antarctic Historical Site.

Another historical curiosity lays amongst the hills and cliffs at the Southern end of the Bay. Here, a short walk climbs to “Neptune’s Window”, the gap over the ridge that follows up from Neptune’s Bellows cliffs. The story tells that in 1820 it was from here that a young sealer Captain, spotted unfamiliar land farther to the southwest, which would later turn out to be the Antarctic Peninsula. When still being second Mate of the ship Hersilia, he was entrusted with a gathering provisions mission at Falkland Islands. There he had heard rumors of a newly discovered archipelago teeming with seals located further south. After informing his Captain James Sheffield, Hersilia set sail to try her luck on the new lands. Successful as they were, Palmer embarked on a second expedition, now as a Captain of the ship Hero, during which he found Deception Island and had the revelling view from “Neptune’s Window”. By that time he thought he had been the first to catch sight of the Antarctic continent, unaware that the Russian explorer Thaddeus von Bellingshausen had seen it already months earlier. But today, the low clouds at the horizon didn’t allow us to spot the icy Antarctic coasts.

The afternoon ended up with some of us having cold swim off the beach, rewarded afterwards by laying down at the geothermally heated waters of the shoreline at low tide.

Back on board, the plan is to spend part of the night at anchor, leaving Deception early in the morning to cross the Bransfield Strait that separate the South Shetland Islands from the Antarctic peninsula. There we plan to head to the entrance of the famed Weddell Sea, to try to spend the next few days on that area.

Jordi I really enjoy these blogs you all put together.They are very descriptive,well versed and also informative.It makes your trip very interesting for the reader.Thank you.Kal H..