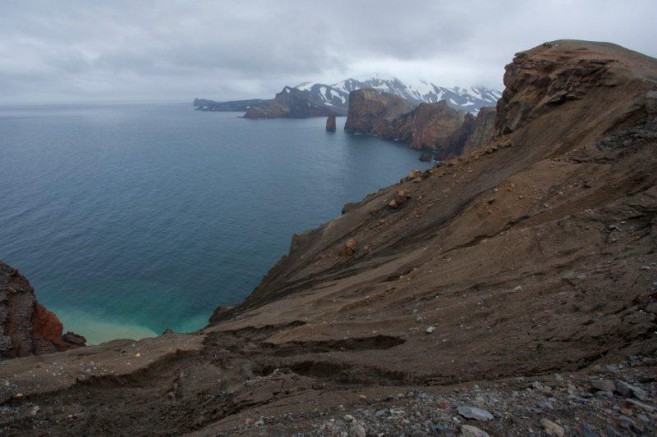 Finally the Drake is behind us - we sailed towards South Shetland Islands during the night between icebergs that seemed to get larger and larger the closer to land we got.

Finally the Drake is behind us - we sailed towards South Shetland Islands during the night between icebergs that seemed to get larger and larger the closer to land we got. Sun came out during the early morning hours, almost like it was telling us that the long, wet, cold days at sea are over and now it's time for the sunny holidays! We curved next to Table island, into the English Strait, took down all the sails and anchored next to Barrientos Island at the Aitcho Island group.

Lots of furling was done before lunch: we had a favourable Drake-wind this time and our sails have been up most of the way (apart from when we hit squalls and took down a few). After lunch we prepared everything on deck; lowered down our beloved Zodiacs, Grey and Blackie, that will take us to all of our adventures on becoming days. The voyage crew gathered to deckhouse to hear Lex's introduction to Barrientos and then it was time to go on our first landing ashore! Barrientos has two different penguin species nesting with good neighbourly atmosphere. Gentoo penguins and chinstraps have their little villages next to each other and they seem to spend their leisure time on the beach all together, almost like they were chatting and exchanging the latest gossip and news. Chinstraps generally nest a bit higher up, if you see penguin colony nesting on a mountain top, those are probably chinstraps. They use their little nails on their feet to keep from sliding down the slippery slopes and their tail provides extra support as they climb up like wobbly little tripods. We were also lucky to see a big elephant seal relaxing on the beach, as well as one fur seal that looked at us with moderate interest before heading out to the sea.

Lex took part of the people to the other side of the ridge to see the lowlands penguin colonies, located on a big field of green algae that is using the penguin guano nutrients to flourish and gives the area a nice lawn-like appearance. We also found a big jaw bone of a large whale, probably a blue whale or a fin whale. We returned back on board for dinner and were quite wet as the wind and the waves were against us on our way back. The wind picked up during dinner so we did not do the evening landing because everyone would have been soaking wet already before setting foot on land. We ended the evening with a nice chat in the Deckhouse with Captain Eric and guides Lex, Annukka and Skinner talking about what we saw today and the plans for tomorrow. Time to get some well-deserved rest after Drake and first exciting day in Antarctica!