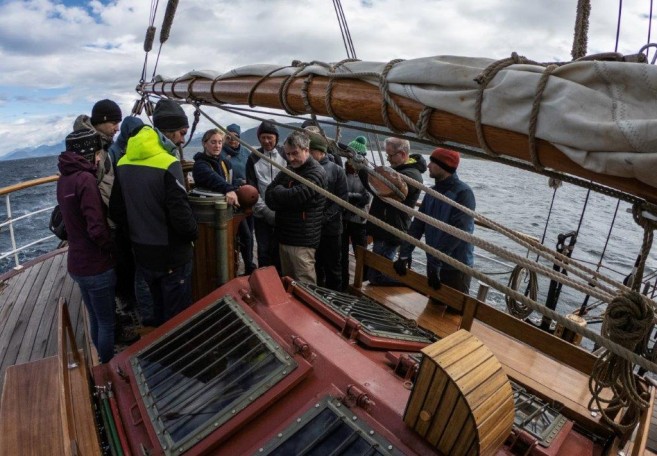 “There must be a beginning of any great matter, but the continuing unto the end until it be thoroughly finished yields the true glory”. Sir Francis Drake

With her full complement of 57 people, between Voyage and Permanent crew, Bark Europa departs from Ushuaia, ready and provisioned for a seven weeks trip along the Polar and Temperate seas of the South Atlantic. Before casting off our mooring lines everybody must attend the Safety Instructions and drills prior to start any sailing trip. Then, with the mandatory Argentinean Pilot on board is time to leave the port, waving goodbye to the disembarking permanent crew, and start heading to the neighbor bunkering area, where we filled up our fuel tanks. In the meantime we kept going with the instructions and familiarizations, starting with learning how to safely climb the rig, necessary if we intend to go aloft to help the crew furling and unfurling sails or just for the sake of taking a good picture. Once ourselves and the ship were ready, the relatively calm waters of the famous Beagle Channel lay ahead of us, offering good conditions and time enough for all us to get introduced to our duties on board during the sailing periods between the planned landfalls: line handling and deck-work, steering and lookout. All before we all join the Watch-system and we hit the legendary open waters of the Cape Horn area and the Drake Passage. In the meantime we leave Ushuaia behind, not to be in a city again until the end of March, when our arrival to Cape Town is scheduled.
Soon after leaving the bunker Station, the characteristic variable W-ly winds that usually blow over the Beagle Channel, made for setting some canvas. For first time during the trip we were pulling on braces, halyards and sheets, getting our first contact with the hundreds of ropes that surround us on deck. Looking now of a baffling complexity, sure the maze of ropes will soon become familiar to us.
Helping the permanent crew, and under the attentive look of our Mate Finn, Lower Staysails are hoisted, together with the Lower Top-sails. All an all collaborating with our engines to reach between 7 to 8 kn of speed. But not long before lunch time, the wind veered paying tribute to their changeable reputation along the Beagle, and many helped striking the Staysails and bracing the yards square.
During the day, framing our ship and offering great views and wildlife sightings, the Beagle Channel landscapes don’t stop amazing us. Actually, its shores are home for the southernmost forests in the world, both in its Argentinean and Chilean coasts, as this passage represents a natural boundary between those two countries. Those woods belong to what is called Sub Antarctic temperate rainforest system, where three species of southern-beech trees dominate the biological communities. From now on the icy Antarctica is ahead of us. Further away lays the tussock grass covered slopes and glaciated interior of South Georgia, and broadening our view ahead, the volcanic Tristan da Cunha. Moreover, the history of the renown Beagle Channel, played an important role on the history of Patagonia, represented a great navigational feat and reinforced the duality between religious believes and science. Sailing along its famous waters, excited as we all are for the start of our ambitious voyage, we should think on the past times when between 1826 and 1830 the recently refurbished Cherokee class brig sloop ”HMS Beagle”, equipped as an exploration ship, underwent a fantastic and
adventurous journey with the task of charting the waters of the southern part of South America. During the trip, her Captain Pringle Stokes became depressed and shot himself, as result of the loneliness of command under the rigid regulations of the Royal Navy on those days. Lieutenant Skyring, now in charge of the ship, brought her to Rio de Janeiro where Robert Fitz Roy was made Captain. The way along such famed channel took us the whole day, but already at 16:30h the Pilot that had accompanied us was picked up the Pilot boat. Right away the engines are turned off and a bit more canvas is added, now sailing under both Upper and Lower Staysails, all the Head rig and the Spanker in the Mizzen Mast, under variable winds blowing between 20 to 30kn, giving us a good speed of 8 to 9kn. Still a bit less of 20nm of calm waters to sail, before getting off the shelter of the Beagle and Picton, Nueva and Lennox Islands, and start our way in the open oceanic waters. Unfortunately the good sailing didn’t last long and before the end of the day all squares are clued up and furled, and the staysails are also taken away. From then until late at night we motor under bare poles on a SE-ly course, while the seas grow and the wind increase slowly getting into the open waters of the Drake Passage. Since we departed from Ushuaia many seabirds had been our companions.
Dolphin gulls, endemic from the Southern Patagonian waters, and King cormorants shared the time we used at the bunker pier. Before stringer winds hit us, we were off mooring and beginning our way along the Beagle Channel. There South American terns, Kelp gulls, countless Black-browed albatrosses and Giant petrels feed on swarms of Fuegian sprat. On the sandy beaches throughout the length of the channel and its islands, Magellanic penguins are busy walking back and forth from their burrows in the higher grounds. Later on, while still busy getting into the watch system, a pod of Dusky dolphins approach us, bowriding the ship and leaping off the water in a playful mood for a couple of hours. Not just they seem to enjoy following us, but also they could be seen around the numerous other ships that share the Beagle Channel with us today. We crossed paths with many of them, on their return way from Antarctica. The Dusky dolphin is small and robust species, widespread on the coastal waters and continental shelf of the temperate seas of the Southern Hemisphere, and they are common and always welcomed sight in the area between the Beagle Channel and Cape Horn.

An atmospheric start to an incredible journey in the footsteps of Drake! Bon voyage Phil

Safe trip everyone! May you have a fair wind and a calm sea.

sounds like a strong yet magical start! congrats and my best to Walt Kroupa!