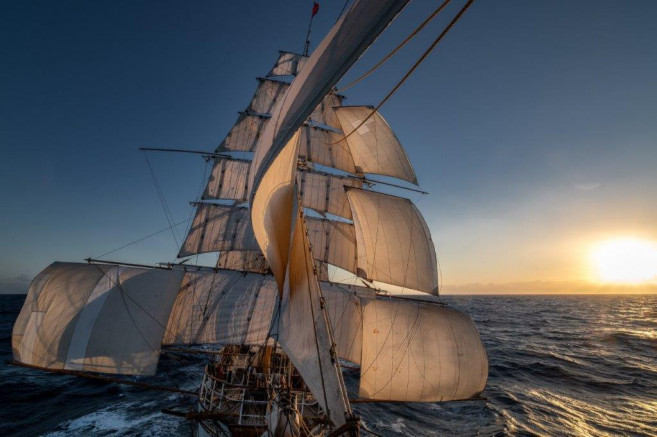 Europa keeps the great progress on a 220º course, making the most of the Northeasterly winds blowing from the aft. During the last 24 hours she sailed a good 156nm at an average speed of 6.5kn. 225nm to her Portside lies the border between Western Sahara and Mauritania, while the atmosphere gradually gets less hazy and clears up. She starts leaving behind the area most affected by the desert dust blown off the coast.

While her wake disappears in the following swell, most of her square canvas is stretched like wings. Matching the winglike pectoral fins of the often spotted flying fish, which help them leap off the water surface and glide over the sea. Eventually some of them come across our decks on their acrobatic escaping flights.

The Atlantic flying fish is easily distinguishable by their very large pectoral and pelvic fins, and forked tail. Feeling on distress it is the rapid beating of this powerful tail that propels them off the water at an angle of about 15 degrees, spreading their “wings” at the last moment, and lift clear of the surface away from danger.  The fish continues to beat its tail even in mid-flight and it can remain airborne for about 100 meters. Using this strategy plus trusting on the “security in numbers” swimming in swarms, they rely on these methods to confuse and evade predators.

Their reproductive biology is likewise fascinating. For instance, they use several ingenious methods to ensure that their eggs won’t be eaten by predators. Often they attach their eggs to the floating moulted feathers of seabirds.  In the Sargasso Sea, flying fish wrap silky threads around pieces of seaweed, making them into solid balls with the strength of nylon. They attach hundreds of eggs to these structures, and the eggs, which are heavier than water manage to stay afloat instead of sinking to the bottom.

Survival strategies that help them thrive in oceanic warm waters despite being a preferred prey for larger fish.

With some of them collected on deck, out of scientific curiosity and to check the possible presence of micro-plastics on their stomach as an accessory contribution to the scientific project Regitze is conducting on board, she proceeded to dissect one of them. Resulting on findings of numerous parasites, semi-digested phytoplankton, unidentified bits and exciting enough, a plastic micro-fibre. The latter supporting the evidence of ocean wide widespread plastic pollution.