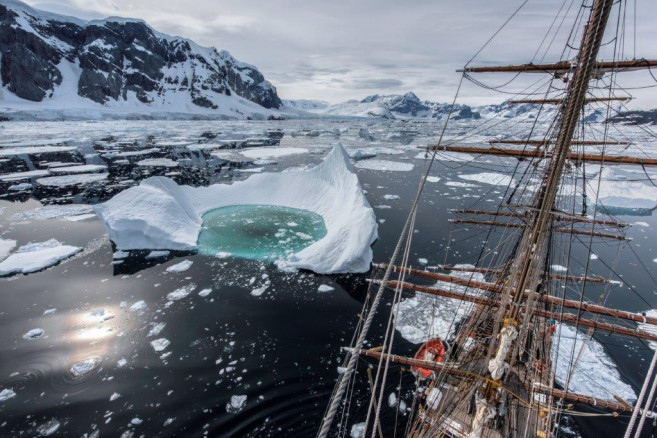 With ice drifting all around us, we spent the night at anchor. Not only the icy waters and shallow areas around us provided a relatively good spot to overnight, but also created a fantastic setting for the “Antarctic party” that followed a fantastic dinner on deck. Too early
for the ones who greatly enjoyed a bit too much of the locally made Vernadsky drinking delicacy, we heaved anchor and set off to slowly
motor our way through the ice to get further south. Europa spent the next four hours pushing her way between the sheets of sea ice and maneuvering with difficulties amongst drifting icebergs, shallow areas and islets scattered all around the area of the Argentine
Islands. Our mate and captain had to focus on the surroundings, but it didn’t give big problems as we continued south. By the time we woke up, the sun was obscured by the cloudy morning but it cast a beautiful light over the glaciated scenery and the still water.
Inside in the galley, Sasha, Hans and Judith were busy, as usual, preparing the breakfast for everyone. The 02.00-08.00 watch were getting ready to handover and the rest of the voyage crew were starting to emerge and take delight in the beautiful surroundings of our path towards Berthelot Islands and Trooz Glacier. By 08.00 most people were up and milling about on deck in awe of the magnificent ice and rock with which we were surrounded in. After breakfast people were sitting out on the bowsprit, getting close to the action and a few had ventured aloft to enjoy the scenery. At 10.00 just as Merel announced coffee time we already arrived at the Berthelot archipelago. A close look at the rounded rocky hills that form the east most of its islands, revealed a multitude of penguins. Those
are the Adélie penguin rookeries, that here at the Western Antarctic Peninsula can be found from here on south, deeper into the Antarctic area along the coast. The landing site seemed clogged by ice, as the rest of the landscape around us. So the guides and the engineer high tailed it into one of the zodiacs and went scouting to see if we could get to a suitable landing place. With their Antarctic expertise sure we were always going to find a place to do a landing. However, once it was found, we decided to wait till after lunch as it was a bit of a mission to drive the zodiacs through the ice and we would need plenty of time. Back onboard, for the next couple of hours everyone kept enjoying their morning. The deckhands were keeping busy with their jobs, the guides were writing and taking photographs, the galley were getting lunch ready, the engineer was in the engine room, the bosun was checking that all was ok for the landing and the voyage crew were reading, relaxing, chatting and enjoying the breathtaking scenery of Berthelot Islands and the Trooz Glacier in the distance. At this point in the voyage we are at the furthest south point that we will reach of 65°19’S 64°06’W
Throughout the ship we could hear the cracking of the ice around us as she ploughed through and often would feel the rumble as she broke some ice. After lunch the 3 bells rang for us to all hear about the plan of action for the afternoon. We were going ashore! Everyone got ready and there was a great buzz around as we were going to see Adélie penguins in large numbers for the first time. The island that we were landing on had quite deep snow so we made a track and kept to it. There were a number of rookeries that we were able to enjoy. Everyone split up, with some staying lower to sit and watch the Adélie’s in their natural habitat, while others climbed a hill to get a better perspective of the surrounding area. It was a very desolate, but picturesque place and it was a very special feeling to know we were the only people for miles around. There were reflections of rock in the water as the growlers and bergy bits floated by while the larger ice sheets were crunching and sitting majestically in Collins Bay. The silence was only interrupted by the Adélie’s as they shouted and were echoed around the bay. Sitting and watching the penguins, seals and skuas was mesmerizing. There wasn’t a
puff of wind and the sun shone high in the cloudy sky which created a dull but beautiful scene over Berthelot Islands. We stayed ashore for about 2 hours. We had quite an adventurous ride back in the zodiacs wondering how long it would take for us to break through all the ice that lay between us and the ship. We got back onboard just in time to warm up before dinner. A short way took us to about a mile from the front of the mighty Trooz Glacier. From then onwards the ice conditions didn’t allow for a closer approach. There we stop engines and drift on the icy waters. Before our eyes, the approximately 100m tall and 1.5nm wide tidal-glacier front, but up the
mountains it stretches for some 15nm long. It flows on a W-ly direction into the North part of Collins. This spectacular area was first visited and roughly mapped by the French Antarctic Expedition of 1908-10. Named for J. de Trooz, Belgian Minister of the Interior and Public Instruction, who was instrumental in procuring funds for the publication of the scientific results of the Belgium Antarctic Expedition (1897-99). We stay in the area for a few hours, starting our way late at night, to gain a few miles northwards to the destination for tomorrow’s morning landing, Yalour Islands. But still after dinner Nilla gave us a talk on glaciers and icebergs which was very fitting as we sat surrounded by the mighty Trooz Glacier and all ice.