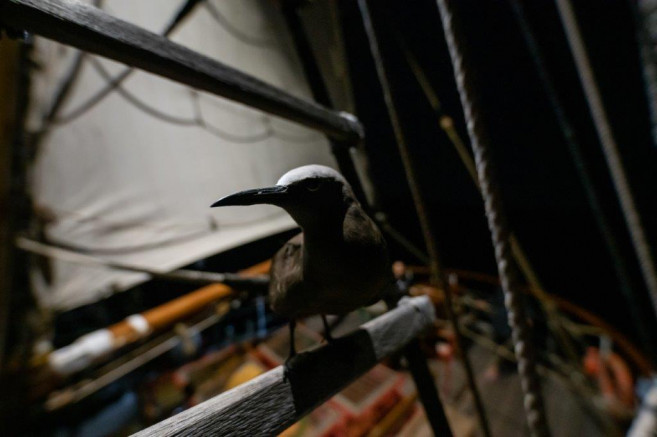 Europa pleasantly sails across the Atlantic, far away from any lands. But today a small Brazilian archipelago lies 240nm to the west of her position, Fernando de Noronha. A group of mountainous volcanic islands and rocks discovered as early as 1503, located 345kn off the coast of northeast Brazil. Their strategic location, vegetation and abundance of wildlife, made out of them a favourite pirate lair for many of the early years. No pirates anymore hiding in their unspoilt beaches, but a small local population mostly depending on fishing and the tourism attracted by their beauty and wildlife, officially noted since 1989, when the archipelago was declared Marine National Park. This surely helps to explain the increase on wildlife that we are spotting during the last couple of days.

Located in the midst of the tropical Atlantic, Fernando de Noronha is home and breeding grounds of many seabird species. Furthermore on our course to Montevideo sure we cross some dispersal and migratory paths of other birds, which nest further north or south.

The first visit of the day was paid by a pretty Brown Noodie, having a rest on the rig’s lower shrouds, towering above it, all sails set. In the night sky, a beautiful full moon shinning. Their ash coloured forehead merging evenly into their brown-grey colour doesn’t make for a good view in the night hours, even if, confident as it looked, let us sit, work or walk around quite closely. The species shares with the Europa the potential to navigate long distances, but on an opposite side, instead of following a set schedule, their dispersal and migration throughout world range is poorly unknown.

Long distance migration concept shared too with the Manx shearwater, which was spotted flying around the ship now and then. Those birds, when not breeding in their colonies located in the North Atlantic, they migrate many thousands of miles over the ocean. The migration pattern apparently follows a clockwise pattern around the Atlantic. A remarkable habit dully noted by sailors since long ago, following winds and currents that drive birds and sailing ships alike in Atlantic crossings.

Magnificent frigate birds, widespread species throughout the tropical Atlantic and Pacific coasts of the Americas, display their large wingspan of over 2 meters and characteristic profile in flight while flying around the ship in small groups. Great Skuas, one of the fiercest seabirds, ruthless predator, hunter of weaker and smaller ones and scavenger, keep following us on our progress. Perched atop the Mizzen Mast a Red footed booby keeps a good eye on them all, and on the hundreds of Flying fish jumping off the surface in large schools. Always a good opportunity for a meal.

On today’s occasion, the bird traveling with us was white, but as we could see in the birds spotted during the last couple of days,  this species is characterised by its polymorphism, with morphs ranging from white to brown, from white tailed to white headed. Nevertheless all showing their conspicuous and singular red coloured feet. With the good views from aloft, it also seem to be interested on our navigation doings and sailhandling down on deck and aloft. Hands pull on braces several times during the day, adapting to the shifting good winds, from Southeasterly to Easterly, slightly veering and backing from an East by North direction, to East by South. Others finalise the rigging of the Main Skysail, today hoisting the yard, getting it into its proper position, rig the last lines and eventually setting the sail again.