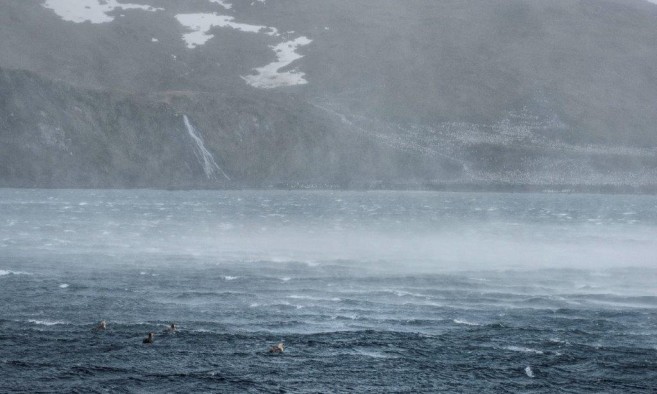 Today is the day where Jordi does the paperwork to allow us to land in South Georgia. There is an appointment with the relevant official in Grytviken at one pm, and we need to be on time. To celebrate being allowed to land later today, Jordi decides to do a morning landing and lead a walk across to Grytviken. We are slow learners, so there is still a surprising level of enthusiasm for his “short walk”.
As part of Europa’s charm offensive there is a offer for the permanent inhabitants of South George to join the Europa at the landing and sail round in comfort while the gullible Voyage Crew tackle another of Jordi’s assault courses. The thought of talking to different people for a couple of hours instead of risking another Jordi walk does have a certain attraction to it. Shortly after seven, four figures are seen waiting at the landing beach. Jordi pilots the Zodiac to collect them, and they step about. All are female and relatively young, and disappear into the deckhouse for a bonus breakfast. The weather is good, and we aren’t likely to be back here any time soon, so it would be foolish to squander the opportunity – for the walk. We survey a familiar scene when we arrive at the beach. Something has gone wrong with the weather – the sun is shining. But we are not fooled as we have learned the South Georgia climate and this is clearly just a decoy before the howling gales kick in on the pass. After all, we noted on the boat that Eric the Wise has only unfurled the Topsails for the charm offensive, and if the weather was likely to be fair he would surely have gone for the full wardrobe aloft. So we layer up for the ascent.
The views are magnificent. Rumours circulate that this is only the second time in eighteen years that Jordi has seen Mt Puget from this walk, and speculation mounts that this is a major source of disappointment for him as it means we are getting off far too lightly. The lenticular clouds in the sky are stunning. When these appear over the Southern Alps in New Zealand this is a fairly reliable sign that the weather is about to crap out big time in the next 24 hours, but down here who knows what it means? We see a hut! The steel cables stretched tautly over the roof and anchored securely to the ground give a hint to the winds that whistle though the valley in winter – it could be a bleak place, but better a hut that a tent. On going inside, we see it a stove with a kettle on it, and other supplies including Marmite and chocolate hobnob biscuits. There is a wifi code scrawled on the wall, but no obvious internet cable. With polished detective skills we announce that this is clearly a
Field Station for the British Antarctic Survey. We discuss the scenery – apparently reminiscent of Scotland, Iceland and the South Island of New Zealand. And doubtless many other places where the landscape is glacial in formation and the weather is lousy. It is beautiful.
As we approach the pass we see a single lone post, and speculate that this is the marker to tell people where to descend to get to the beach we have just left. This is the first track marker we have seen in South Georgia. And at the top of the pass is second marker – a large cairn – very reminiscent of the Lake District. We finally see Grytviken, bathed in sunlight. The familiar rusty collapsing boilers and other structures appear, but there are also some freshly painted white buildings in good condition. In the distance we see the fabled graveyard with a which painted fence all around. Signs of habitation! People! Assuming they haven’t all gone sailing, for the one thing missing from the scene is the Europa.

Dear Mr Ghostwriter please stay on for Cape to Cape. You paint a picture which I know is true