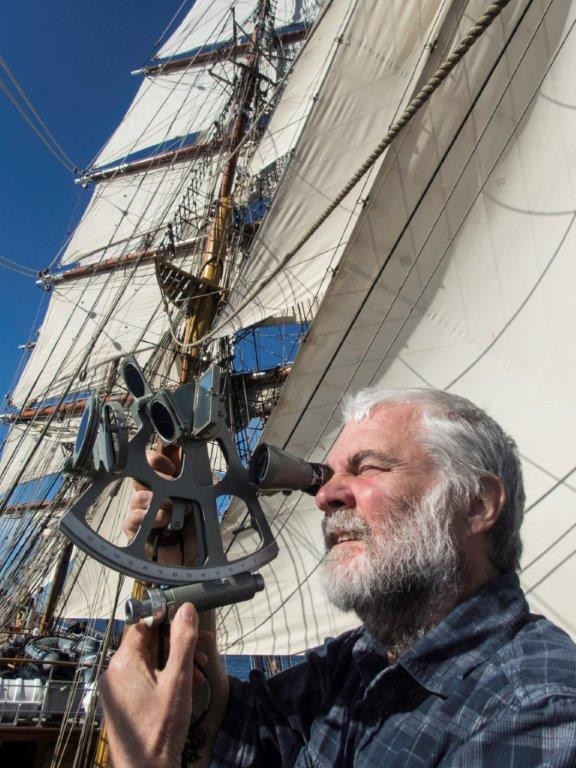 The light airs that blew during last evening ended up leaving a calm windless early morning. Europa feels just like being afloat with almost all her canvas set over flat seas, under clear skies where the moon and countless starts shine.

A couple of hours before sunrise Captain decided to start one of our engines to keep advancing at a speed of about 5kn.

Just before sunrise wind start turning to NW-ly and slightly increase to 9kn, as we move at the edge of the High Pressure system that has been affecting us during the last couple of days. This bit of a change on the conditions made for calling hands on deck to clue up the Courses, set the Dekzwabber and Fore Top Mast Staysail and brace sharp on Port tack, followed by a breathtaking sunrise over today’s peaceful waters of the South Atlantic. Many were on deck after the morning sailhandling exercise to enjoy the daybreak warm light dyeing the scattered clouds and gradually lighting up the rig, a good announcement for a sunny and mellow day.

Today, taking advantage of those calm, sunny and warm conditions, crew members took the Sextants out of their boxes and started to introduce us to the truly amazing world of Celestial Navigation.

In our modern times, based mostly on the electronic revolution of satellite settings and guidance, we just can admire and praise the traditional methods of positioning and navigation that in one way or another has lead seafarers across the vast oceans for millennia.

The older method to estimate positions while sailing was just based on dead-reckoning, where the current position is calculated by using a previously determined one. From there and knowing our speed and course over a period of time we can estimate our new location. This process is subject to significant errors due to many factors as the speed and direction must be known precisely at all times.

Astronavigation came as an aid for more accurate positioning.

This technique is based on taking “sights”. What we actually do is calculate the angle between celestial body (most commonly the sun but also are usable the moon and many stars) and where its zenith (highest point in the sky) projection hits the center of the earth. We can measure the angle of the celestial body to the horizon and using conversion tables we can know its zenith. Then transform it on where it would hit the center of the planet.

At a determined time the celestial bodies are located over one point on the planet’s surface, which latitude and longitude is known as the “celestial body’s geographic position” and is listed on tables on the Nautical Almanac for that specific year.

The angle between a celestial body and its zenith gives us the diameter of a circumference to plot on a chart, with the center on the “celestial body’s geographic position” Our position lies somewhere on that circle. Taking sights to another celestial body gives us another circle that intersects the first one in our position. To use this procedure, accurate knowledge of the time of the “sights” is essential.

The easiest “sights” to take and most utilized from the old times are the “noon sights” of the sun and the use of the Polar Star. The most important celestial body for positioning was the Polar Star. It always indicates the North, and its angle to the horizon gives us the Latitude.

On the other hand, taking a “sight” when the sun shines at its highest (noon position), gives straight away a latitude line (the Sun at its highest indicates the South on the Northern Hemisphere, and the North on the Southern Hemisphere) To calculate the Longitude we need to know the exact time when a celestial body projection hits the earth’s surface in a specific time.

Before accurate watches for the ships were available, the only way of roughly fixing the altitude was to check angle difference between the calculated N or S (depending on the Hemisphere we are in) with the sun at its highest point (bearing South or North), and the compass. With this we get the Variation. There were Variation charts, depending on longitude. Like this navigator could approximately estimate the Longitude.

For precise time readings it is necessary to use accurate clocks. Historically, the need for those timepieces led to the development of more and more accurate chronometers, a difficult field when they had to be mounted on board rolling ships that were at sea for long periods of time in a wide range of climate conditions. In the 18th Century elaborate pieces of art where developed to keep track of time at sea, which evolved to end up giving us the nowadays clocks. Between other watchmakers of the time trying to build such device, one name stands out: John Harrison. He invented the long-sought Marine Chronometer, able to keep accurate time and thus providing the essential missing piece for establishing the Longitude at sea and in that way increasing the safety, sailing, mapping and charting possibilities on long-distance sea travels.

He spent great part of his life trying to manufacture such watch, presenting his first one on the year 1730. But it was not until 1759 that he finished a usable and close to definitive model, that was successfully tested on a long sea voyage in 1761.

Wrapping up all this, for practical celestial navigation, as we were told on the instructions about the subject, is required a good timepiece, a sextant and a current Almanac with the schedules of the coordinates of celestial objects, a set of sight reduction tables and a chart of the region.

The use of the sextant is the heart of this discipline but learning its proper way requires practice, patience and endless calculations. Nowadays electronic instruments and computers represent an aid for all the theory and math’s behind positioning with it, and the calculations could be quickly done with the input on a program of the sight taken.

It is amazing to think that the sun, the moon and the stars, located at an incredible distance from our planet can be used to fix our position in any given point of the earth surface. Many of us took a moment during the flat calm and sunny day to familiarize ourselves with the sextant and have a glimpse of the methods used for positioning, while sunbathing on deck. The good weather was also used to take the sailmaker sewing machine outside to fix the Storm Jib that was ripped days ago under stormy conditions.

The day finished as it started, with a great sunset, spiced with a brief peek at a difficult phenomenon to see at the last second of the setting sun, the Green Flash. The most accepted explanation about how it is produced tells us that the green flash can happen when the last rays of sunlight emitted from the upper limb of the sun are refracted before reaching the observer’s eye. The shorter wave lengths of the sunlight, which are violet, blue and green experiment greater refraction than the rest and occasionally can be seen when most of the light is cut off by the sun setting under the horizon and the light is being scattered by its horizontal passage through the lower atmosphere.