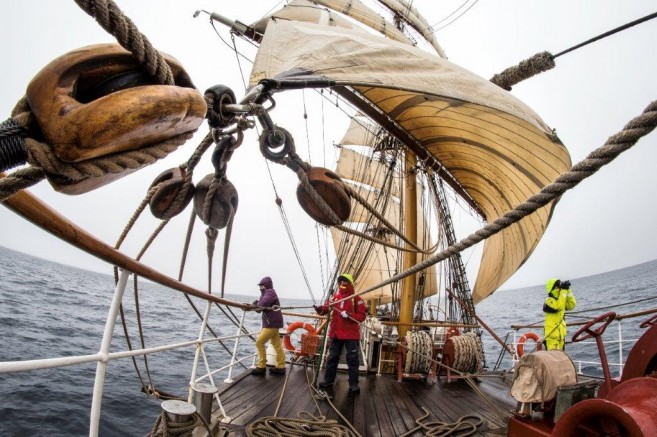 
The decreasing speed attained during last night and early morning,
reaching just about 5kn, didn’t allow an early arrival to the Antarctic
islands to attempt our first landfall already in the afternoon. If
possible, we will try to set foot in Barrientos Island in the evening.
On the other hand, the calmer sea conditions and fair 15kn breeze let us
have a pleasant last night and quiet sailing day. A welcome change over
the fairly rough seas we experienced on the Drake Passage crossing.
Since yesterday afternoon almost all our canvas is spread to the wind,
with the exception of the Gaff Top sail and the still damaged Fore
Topmast Staysail, and just a few adjustments to the braces were
necessary during the morning to keep our Southerly course towards the
English Strait. This passage lies between Greenwich and Robert Islands,
in the South Shetland archipelago. Its name dates back to at least 1822,
established during the early sealing and whaling times in Antarctica.
We made use of the day to keep going with the guides lecture program,
plus having a couple of meetings with our photography and video team.
Arnoud shared with all of us some interesting points relating to
Antarctica and climate change and explaining why those regions are of
special interest for this subject. An idea and good challenge for the
photographers on board is to try to illustrate all this in videos or
pictures.
From early morning excitement fills the Europa. Feeling the colder
temperatures, together with an increasing number of seabirds flying
around, a few Hourglass dolphins bowriding our ship and sporadic sights
of penguins porpoising here and there, it seems we can all sense the
proximity of Antarctic land. All powered up by the evolutions of the
crew on deck organizing everything for our imminent arrival. The rubber
boats we use to bring us ashore are prepared and fueled up, safety lines
and nets removed and during the afternoon, getting closer to land, all
sails have to be clewed up and furled. First Royals, Top Gallants, Outer
Jib, Middle and Upper staysails come up while the first bergy bits are
spotted by the lookouts.
Sailing half a mile from the so named Potmess Rocks, we leave the
characteristic and conspicuous flat-topped Table Island and the
Watchkeeper on our starboard side, barely visible hidden behind a misty
veil. Soon the impressive rocky shores of Fort Williams come into view,
topped by a navigational beacon, while the swell breaks upon Passage
Rock, so named since the early 18-hundreds when the first sealers came
to this area because it serves as a guide to vessels passing through the
strait.
Soon groups of Gentoo penguins swim close to the ship as the first rocks
and shallows surrounding the English Strait become visible amongst the
low clouds and foggy weather. We make the last approach to our anchorage
under Top Sails, Spanker, Lower Staysails and Inner Jib, but soon
engines are turned on and all sails are dropped or clewed up, starting a
hectic afternoon of furling all our canvas. In the meantime the anchor
drops and the crew, with the help of some of us get everything ready to
go ashore after dinner. All in the drizzle and fog that from time to
time let us have a glimpse of the spectacular surroundings, crowned with
dark basaltic pillars and cliffs, broken here and there by sandy
beaches, home for countless Gentoo and Chinstrap penguins.
At that point, seawatches for the voyage crew end. From now on, until we
will face the Drake Passage northbound towards Ushuaia at the end of our
Antarctic adventures, we will be in daywatch, using the daytime to go
ashore or conduct photo-workshops.
Still with some daylight and relatively good conditions to do a landing,
a short briefing right after an early evening meal preceeds the start of
the Antarctic activities off the ship.
Soon we were all ready to go ashore at Barrientos Island. This beautiful
vegetated island belongs to the Aitcho archipelago, a group of islands
located in the English Strait. Even though the area had been used by
early sealers and whalers on the 19th Century, it was not until 1935
that it was charted and baptized after the Admiralty Hydrographic Office
(HO), thus its name.
A short zodiac ride drove us ashore at the so-called Whalebone beach. A
few curious Chinstrap penguins and a myriad of Gentoos receive us to
their homeland. Many youngsters of the latter species roam all over, as
they tend to leave the nest where they were born as soon as they can
actually walk around. From then on the chicks wait at the shoreline for
their parents to come back from their foraging trips to feed them. Once
they spot their progenitors, a frenetic chase takes over, while the busy
parent just can run away, stop for a second, feed the chicks and
disappear where the teenagers can’t go yet until they grow the
definitive waterproof adult plumage, back to sea.
In contrast, Chinstrap chicks stick much more around the rookeries where
they hatched, waiting to be fed by their parents.
Despite the receding daylight and the freezing temperatures we all
greatly enjoyed our first close encounter with the Antarctic wildlife.
Quite surprising for many of us to have the chance to experience such an
amount of charismatic Antarctic fauna all over the landingsite, in every
step we make. The dark basaltic rocks and the green meadows formed by
slopes covered by the annual growing algae Prasiola crispa, frame the
penguin rookeries, while Europa sits at anchor in the background of the
scene.
Like that we spend an enjoyable evening ashore, before embarking the
ship and spending our first calm night on a steady ship, after the last
days riding the wild Drake Passage.