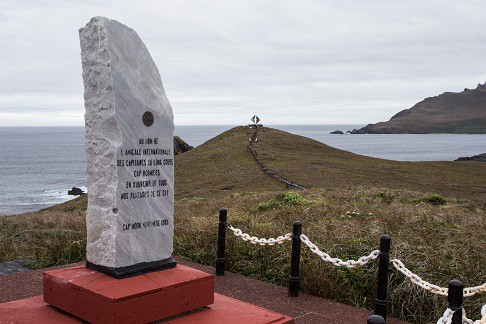 During the night and early hours in the morning we set all headrig plus Deckzwabber, Desmond, in the Main Mast setting all squares, and in the Main Mast Top Sails, doing speeds of between 6 to 7 knots on 28 to 30 NE-ly winds, allowing us to stop engine at 06:45h and sail our way South towards Cape Horn. By that time we were entering Paso Mar del Sur, in the Wollaston Archipelago, located between Herschel and Deceit Islands. In fact, Horn Island is the southernmost one of this archipelago, together with those last ones, plus Hermite, Freycinet, Bayly and Grevy Islands plus several islets and rocks. As we approach the Horn we drop the sails in the headrig and the staysails. But as we turn to Starboard heading straight for Caleta Leon we can set Lower Staysails again. Another ship, the Stella Australis, from a tourist company based in Punta Arenas and specialized on tours in the Southern Chilean fjords, was in Cape Horn around 07:00h. From them we got the information about the weather and sea conditions in the landingsite at Caleta Leon, the only approved landfall in Cape Horn itself.

As we approach the anchor site we can see that they are finishing their landing, and the conditions are promising for us as well. We drop anchor close to them while taking away all canvas and furling the head rig, Fore Top Gallant and Royal. The scout zodiac is sent with our guides to assess the conditions at the beach and soon we start our operations to land at the Horn, using the  small rocky beach of Caleta León. Once on land we follow the stairs and boardwalk that lead to the famous lighthouse and the albatross monument, the highlight places to visit during the landing. As we approach the lighthouse and the small chapel nearby, the Chilean Navy officer posted here for a year, together with his family, welcomes us. They will keep track of the maritime traffic on the area and secure this strategically positioned island, until next November.

Eventhough not much walking can be done in the island and we need to be all the time on the boardwalk as Cape Horn is nucleous area of a National Park and a Biosphere Resesrve, feels great to be in the mythical Island of Cape Horn, both important for the sailors and from a biological point of view. The island represents a highlight on the conservation of the subantarctic biodiversity at a worldwide level, being home of the southernmost forested area in the world, covered in many areas by bushes, low trees and an amazing diversity of non-vascular plants. Underwater there are amazing kelp forests and many species of algae. Flying around several curious Carcaras are seen, and a couple of Turkey vultures as well. After finishing our landing, Jordi gave a short introduction to the Kelp world. He picked up two specimens of different species and chatted a bit about the ecological importance of those algae for maintaining the coastal ecosystems of the area. He showed us the plants and their different parts, we could enjoy a hands on kelp moment before we dropped them overboard again.

While on deck we could hear and feel the wind increasing and starting to gust, increasing quickly up to 45 knots. We realised that we did the landfall at the Horn just in time before the weather and wind conditions became too rough. Afterwards, the pilot boat approached us and using our zodiac we brought them there as the wind was too strong and under those conditions is was better option than having their navy boat alongside the Europa. Soon we turn around, brace to Starboard tack to sail close to beam reach and while we set the Lower Topsails we furl the rest of square sails that were ready to be set, but not under the 45 knots of wind that we were having. Then Aap is hoisted while instead of the Deckzwabber we rig a smaller storm sail on its stay. Last sail we hoisted before lunch was the Fore Top Mast Staysail on the hea rig. And with this configuration we start our bumpy way to Antarctica through the infamous Drake Passage.

Wind blows unsteadily between 32 to 49 knots from the West, as we try to keep a course of 160 to 170º, doing speeds of around 4.5 knots, heeling to Port side and rolling heavily on 6 mts swell. During our traditional meeting after dinner, Captain Harko informs us that so far, since leaving the Horn we sailed 40 nm, and the weather forecast for tomorrow looks similar to what we are having at the moment. Not many of us show us to the watch duties, and seasickness takes its toll on almost everybody. Many still need to get used to the sea motion and work out their sea legs, but during this trip we will have time enough for it. Anyway voyage crew only have to relive themselves for lookouts as the steering is done from the wheelhouse by the Captain, Mate and some crew members. During the night the Fore Top Mast Staysail rip apart and the permanent crew watch have to take it away, get it ready for stitching and replace the damaged sail for a Storm Jib.