Today in Hoorn, in the medieval Oosterkerk church, the captains and crew of the 'Europa', the 'Tecla' and the 'Oosterschelde' were awarded commemorative trophies and medals because of the succesful voyage around Cape Horn in late 2013 during the around-the-world voyage. The trophies and medals were handed out by Onno van Veldhuizen, Hoorn's mayor. Present was also Maria Tesera Infante baffi, the Chilean ambassador in the Netherlands. Organiser was the Dutch foundation of Cape Horners. 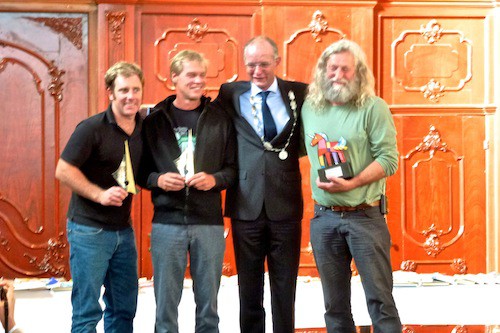 Dear Peter, Thank you for your email and for telling us about your father. We have informed the Cape Horn Society in Hoorn, The Netherlands, where he had received the Cape Horn Medal on 19th October 2003. We are sorry to hear about his passing, but pleased he had such good memories on this special voyage. Best wishes, Liza de Kurver

Hi there. I saw your piece while writing a short article about my father-in-law, Dr Geoffrey Wood. He sailed with Europa around Cape Horne in 2002, and I believe may have been the first British person to receive the Cape Horners medal. Sadly he died on 24th January this year, aged 87. The Europa trip (he was on for 9 months, from Seattle to Rotterdam) was the last, but most magnificent, of his many adventures in the mountains and on the seas of the world. I would be grateful if you could pass this message to the Cape horne society. Best wishes, Peter Holmes