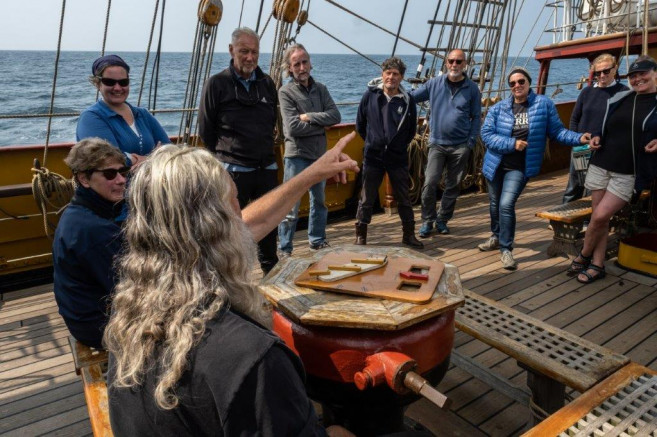 With a Low Pressure system catching up and overhauling our path, our course was turning on a NW direction. That made for changing our tack in the afternoon. Like that, when the new watch came up, we wore ship, and stood on the other tack until the night watch.

Everything in a ship of our characteristics is a balance of forces. Rig stands up helped by stays, sails pull us with the winds, yards can be moved pulling or easing ropes, sails come up and down pulled by halyards and downhauls. To change tack we rely on shifting the balance of forces produced by the sails fore, midships and aft. There are a couple of methods to achieve that, but Wearing ship (when there is plenty of sea room) is usually easier than tacking through the wind.

It basically consist on taking pressure off from the aft of the ship, letting fore mast and head rig to work, resulting on turning the bow leeward with the wind. Using the Head-rig and canvas in the Fore Mast we sail the ship around until the wind is astern, with the aft sails neutralised so that the stern could come up to the wind.

"Instead of going wherever was most convenient, and running from place to place, wherever work was to be done, each man had his station. A regular tacking and wearing bill was made out. Everyone knew his station and must be there and respond when all hands were called to put the ship about, and was answerable for every rope committed to him. Each man’s rope must be let go and hauled in at the order, properly made fast, and neatly coiled away when the ship was about."

All hands were called on deck after lunch, and distributed between Poop, Main and Fore decks. Hands-onthe ropes, the operation began with taking in Spanker and Gaff Top Sail, taking pressure off the aft of the ship. Lower Staysails and Main Course followed. Like that, she started to turn with the wind, pulled by the sails on the Fore Mast and Jib boom. As she turns, Main Mast was braced gradually maintaining the yards parallel to the wind not to take any of it, while Fore Mast still braced sharp helping the turn. Once stern has gone through the wind, is time to set Spanker and gaff Topsail on opposite tack than before, start bracing fore mast as well. At that point the headsails started to back, time time to pass them to the other side, and start sailing in a new course on the new tack. The whole operation involves ending up making almost a circle to get to this new course. The more effective and properly done, the smaller the circle, the less ground lost to leeward.

Once the manoeuvre was successfully accomplished, the sails that were hauled down or clewed up were set again, and we find ourselves sailing on an Eastward course. The light winds made for starting our engines to keep a bit of speed, and were roaring until the night watches, when Southerly winds met us. New situation made for bracing more square and for a course change, now steering to the NNE. More downwind course means more sailhandling as well. Some fore sails get shadowed by the canvas behind and had to be taken down, others needed a pull on the sheets, while Skysails are unfurled and sheeted down once more.

"Setting the sails by no means ends the work at them. Trimming is quite important. Every time there is the slightest shift in the course or wind there ought to be a corresponding shift of trim so as to catch every breath the sail can hold. To effect this with the triangular sails a sheet must be slacked away or hauled more in; while, in the case of the square rails on the yards, a brace must be attended to."