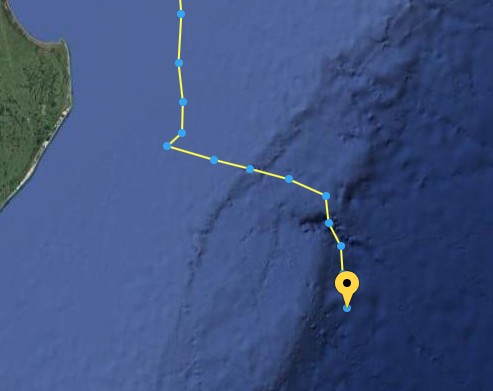 From last midnight onwards the unstable winds reaching over 25kn between calmer periods made the watches pretty hectic on deck. We started the new day wearing ship, sailing afterwards with all our canvas set but the Skysails, Flying Jib and Dekzwabber. Part of the watch was used to trim the sails and braces, process that involved all of us in a quite time consuming dog-watch. Later on the wind picked up associated with small squalls passing by. Uppermost sails were taken away together with the Gaff Topsail, for first time during the night. From then on Royals, Skysails, Outer Jib and Gaff Topsail were set and stowed away several times following the increasing and decreasing winds.

Europa sailed on a ESE course, heeling to Port side, thing that made us pay attention to all lines left on deck while working, to try to avoid getting them in the scoopers and eventually overboard. By breakfast time all canvas was set except Skysails and Flying Jib, with the Europa doing between 6 to 7.5kn, and after the watch change at 08:00h the S-ly wind picked up again, moment to stow away the upper staysails. The rest of the morning followed more or less the same scheme, with a couple of squalls and showers passing by, but inbetween the sailhandling our guides could start their Lecture program on board, today with Lex talking about Albatrosses and Petrels (belonging to the tubenose family) after the morning coffee-time.

A talk very relevant for our trip as those birds are already around us and will accompany the ship during the rest of our trip, being South Georgia an important nesting site for them. Some of the Petrel species also breed in Antarctica itself, being the albatrosses more a Subantarctic species. The afternoon activities were pretty similar to the morning ones until an hour or so after the afternoon coffee-time. Until then we try to keep sailing on a ESE course, close to the wind, and experiencing some transitory showers with their associated wind shifts in direction and force. When they pass over us the highest sails are taken away just to be set afterwards. All an all a good hands-on sail training for all of us.

Also we got a while when it was not so busy on deck and Jordi could do his introductory talk on birds of the South Atlantic and Antarctic areas, as some small flocks of Cape Petrels flu around, together with a few Giant Petrels, even a solitary Atlantic Petrel pay us a visit, while some majestic Wandering and Royal albatrosses soar over the swell close to the ship. Those species have the largest wingspan of any flying bird in the planet, reaching over 3.2m to 3.5m. During their talks, Lex and Jordi mentioned a problem that is related with the decreasing in numbers of those birds in these waters: the long-line fisheries. Not so long ago many albatrosses were caught on the baited hooks in the long lines before those sank in the ocean to fish in the deep waters.

Even though nowadays mitigation measures are put in practice and the numbers of birds caught on those hooks is declining, Lex managed to take a picture today of a Royal albatross with a fishing line and its hook stuck on the beak. When the afternoon talk was finished, we were hit by another shower with increasing associated winds up to 25kn, but quickly afterwards, surprisingly the wind died behind the squall, dramatically dropping to virtually nothing, shifting for a while along all the S-ly quadrant. After a while on standby it was clear that the wind was not coming back, and as we had to gain distance towards the South, both engines were turned on, course was changed to go straight South, and we had another busy afternoon taking almost all sails down and furling them. Just the Inner Jib, Top Mast Staysail and Mizzen were left set, and with help of the watch and whoever was around on deck we took away the rest of canvas and we had our first practice on furling up in the rigging, assisted by permanent crew members. Many of us enjoyed the experience of working aloft hand by hand with the crew.

As the evening comes the wind stays S-ly increasing in strength to 15kn, as we motor South towards South Georgia. Not good conditions for sailing but anyway we need to keep some speed towards the island to try to arrive there on the 25th November. Still a few days to go.