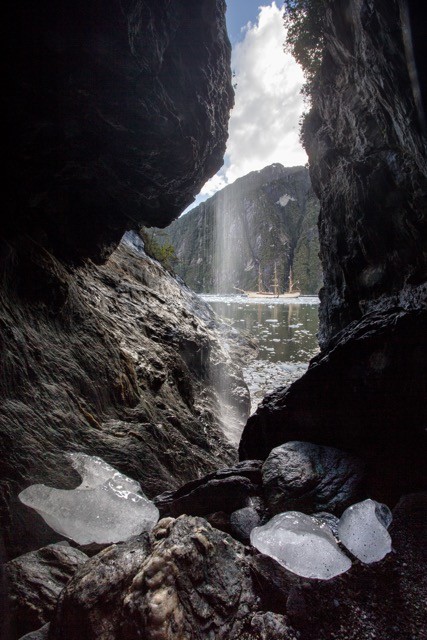 The new day welcomes us with cloudy skies and rainy weather, as we motor along the Beagle Channel westwards.

Around 05:00h we leave behind the lights of Ushuaia as the daylight fights to reach us over cloudy skies and rainy weather. Last night we managed to leave Puerto Williams before midnight, once the formalities with the Chilean Maritime authorities were done, and now we sail along the Beagle on our way to the so called Glacier Alley, an area where several glaciers end up straight on the waters of the Beagle. Dark green forests and the high mountains of Cordillera Darwin with its snowy peaks dominates the shores of this area, with glaciated peaks attaining heights over 2000 mts.

Before our morning coffee time we started passing by those glacier fronts, named after European countries. From E to W we can enjoy the majestic Italy Glacier with its imposing front and its tongue steeply climbing up the Darwin’s Range mountains. The next one to appear on our Starboard side is the Holland glacier, on that case it ends up on a lake higher up the hills instead of offering the ice directly to the Beagle Channel. As we sail along we meet the French glacier, with its perfectly carved “U” shaped valley, and then here it comes the German glacier, with its pretty long and flat structure close to the coastline, until it climbs up inland to higher altitudes.

Besides those huge Patagonian glaciers that can actually be seen on our way, several inlets and side fjords open to the Beagle Channel as well, like Seno Pia and the narrow Seno Garibaldi, that we plan to explore later on this afternoon. What a great feeling as we sail those unspoilt fjords of southern Chile, surrounded by the impressive glaciers, mountains and old grown beech forests of this desolated corner of the world. Place where no humans live since the native yaghans abandoned their traditional semi nomad and canoeing way of life at the interface between the 19th and 20th centuries. Since then those channels are just used by the local fishermen with their small fishing boats, and also by a few tourist tours. This whole area comprising Cape Horn itself all the way up North to Seno Almirantazgo, in the Straits of Magellan, from the year 2006 is part of the Cape Horn Biosphere Reserve from the UNESCO.

In between the sightseeing of all those glaciers, Jordi offers one of his lectures on Kelp, the underwater forests of the Subantarctic regions. In fact his thesis is about those algae, and he is always eager to share a talk on the Kelp biology and its great ecological importance for the coastal marine ecosystems of the area. This time we gather in the Deckhouse and he shows us some specimens he collected during our landing at Cape Horn.

After lunch we already turning North on a deviation on the general route towards Punta Arenas, to have a look and spend the afternoon in the Garibaldi Fjord. This fjord offered great cruising with spectacular views of the cliffs, forests and mountains all around. The origin of the name is still veiled, but there is evidence that it was given by the missionary De Agostini, to commemorate the Italian hero Giuseppe Garibaldi. We slowly motor its 11 Miles in length, until reaching its head, that hides one of the finest glaciers of the area, coming straight down to the sea from the glaciate mountains of Darwin’s Range.

We approach to close distance from the glacier front, dealing with some areas covered with brash ice and over some uncharted waters as the glacier has been receding during the last years and the front is far aback from it used to be… all for the amusement of the pilots we have on board…

There we drop our zodiacs to do a short cruise that ends up with a little surprise, landing on a little cave where we can gather together after crossing the little waterfall that guard its entrance. There we can have a glass of molten wine that our fantastic galley people had prepared for that special occasion. From the little cave we can enjoy the views over the brash ice covered waters of the fjord, the splendid old grown Patagonian forests on the mountain sides and the Europa herself framed by the rock walls and the waterfall of the small cavern.

Before dinner we are all back on board and the ship turns around to sail towards the Beagle Channel again after the fantastic visit to this outstanding little Chilean fjord. We sail overnight on our way westwards to the Straits of Magellan. But before going the bed, we had quite a cheerful night at the bar, when Lex and Skinner proposed “the ultimate Quiz” about our trip that slowly is reaching its end, and has been loaded with information, landings, lectures and new experiences for all of us.