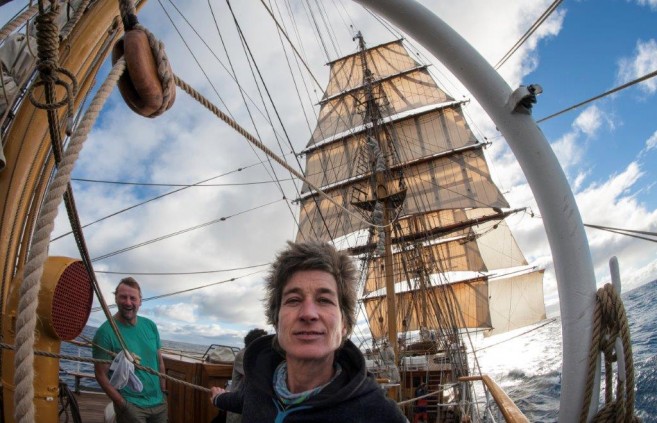 From yesterday the wind had eased to between 10-15kn, becoming SW. Europa sails downwind with the three starboard studding sails set plus the topgallant studding sail on port side. All squares are set but the main Course, and on the headrig just the outer jib tries to catch some wind. At dawn the wind seems to pick up a bit, increasing to around 20kn, rising our 4 to 5kn of speed up to over 7, but the blows didn’t last long and soon, as the daylight takes over the darkness, the wind field comes back to 10 to 15kn, blowing under the overcast skies, that gradually clears up leaving a sunny morning.

Following the winds, steering the whole day more having an eye on keeping the sails full than actually over the compass, we actually did quite a good run today of 125nm, on a general course of 060º. Now is just 274nm left until our arrival at Cape Town, and in fact 240nm to have a look at the Cape of Good Hope.

The talks of the day were in charge of Peer in the morning and our fellow voyage crew Lewis in the afternoon. Peer repeated his Photo workshop, where we could bring our cameras and learn a bit more of their countless possibilities besides the Automatic or Program mode. Later on Lewis had an interesting lecture about Wine and its history, from their origins in the Persian Region about 5000 years ago to the recent times, after many years of a selective process towards what we call today the Noble varieties. Emphasis was put on the interesting past and present of the Chilean and South African Wines.

South Africa was produced during the Apartheid times, but it was banned to import it in many countries. Also the production was under a cooperative system controlled by the government. Things loosened up a bit when Nelson Mandela became President. He inherited a South African production of 70% white wine, not so popular abroad as the red, furthermore the majority of it was distilled as Brandy and sold at low prices to the black workers. As years passed by the system evolved and changed, from central producers of low quality grapes to now starting to allow privatizations and quality controls that led to an improvement of the grape itself and consequently to the production of better wines.

Despite that the weather was partially cloudy at noon we had some clear sky in view, so we proceeded to make a sight with the sextants on board. Quickly the voyage crew on watch or resting approached the wheelhouse. Jelte and Eduardo took the sextants and started to follow the Sun until it reached a maximum altitude in the sky. So at our local noon we found that the altitude of the Sun, after applying all the corrections was 36°43.5' South, pretty successful sight, having in mind that the difference with the latitude given by the GPS was just of 1.602'.