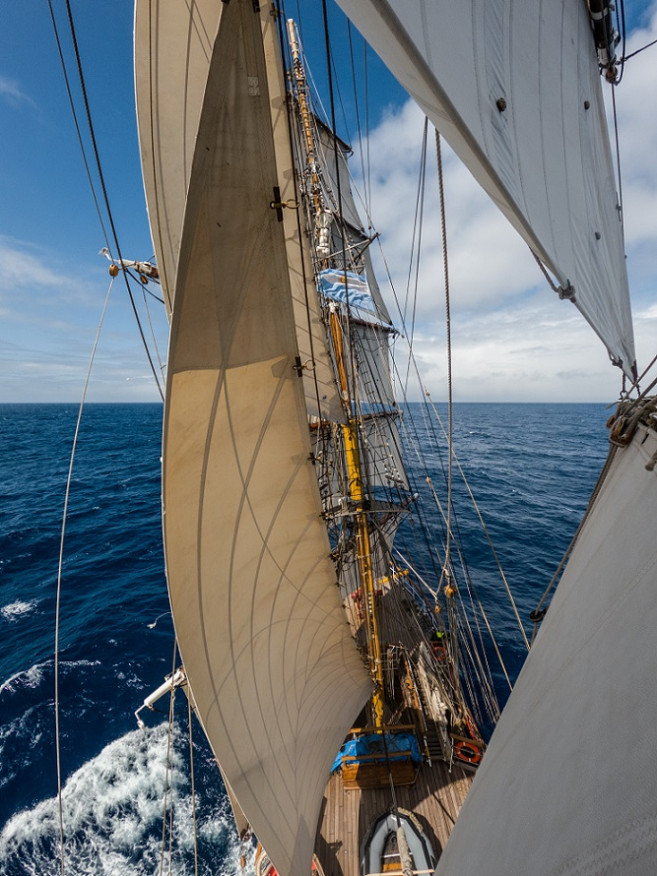 Drake Passage. Closing up to the Antarctic Peninsula, enjoying a great sailing day.

100, 90, 80nm left, hours pass by and on our good Southeasterly course towards Antarctica, the land gets closer and closer. South Shetland islands will be our first destination. Seeing our progress, while steering or having a look at the ship’s GPS, already some curious voices rise asking about time of arrival and first destination. Well, as usual, wind and sea conditions are the ones driving our schedules and programmes. Of course plans are laid up, ship is being readied for arrival, but sailing as the Europa does and its famous for, it will not be until being closer to land that we could be me more sure about arrangements for the landfalls. Always in a sort of a strategy game between distances, sea conditions, winds, weather systems, speed, ice. The beauty of this way of sailing, operating and working that makes out of every voyage a unique experience.

Engaged on that plot and dealing with the temperamental nature of the Drake Passage, its frequent shifts of mood, raging winds and calms, monstrous waves and quiet seas, we wake up motorsailing, with one engine helping to keep a good speed of 6 to 7kn under 10 to 15kn of winds from the West by South. Just like yesterday, the seas are good and the skies clear. By the early morning winds are good enough to stop the engine and sail again. Just the Upper Staysails and Gaff Topsail lack to be sailing under full rig.

Further into the Antarctic waters and closer to the coasts, the bird diversity around the ship has started changing. Our daily survey to collaborate in the Citizen Science Project, starts revealing a decreasing number of albatrosses and firsts sights on our voyage of the beautiful Cape petrels and Southern fulmars. Giant petrels, ever-present every day since departure, keep flying around the ship.

In the afternoon, a general increase on the wind and the passing squalls with associated stronger blows up to 30kn, sleet and rain, make for dousing and furling Royals and Middle Staysails. On that fashion we sail for the rest of the day at a good speed and course towards the South Shetland Islands. The first lands for us to visit and also the first lands ever to be discovered of the unknown “Terra Incognita Australis”. The earliest sighting of those Antarctic Islands had to wait until 1819, until then, the existence of a mythical Southern land mass was still to be confirmed.