We depart from Grytviken around 06:00h in the morning, on variable weather, with clouds over the mountains, and grey sky announcing rain, but here and there, over the ocean, the sun starts to push its way through. Wind started increasing as well. All this makes the program of landings for today to be pretty flexible. 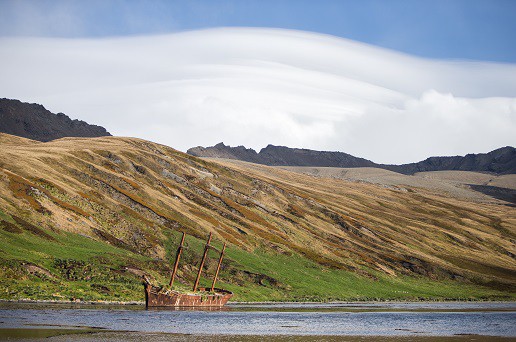 But following our plan, the Europa sails between along the coast between small offshore islands and reefs until entering the tiny key-hole harbour of Cobbler’s Cove, all this while having breakfast. On our way
the wind blows at 20 to 25 kn from the NW, allowing us to gain a bit more stability setting Fore Top Mast Staysail and Aap. In Cobblers Cove a group of hikers is to be landed for a walk over the hills to a Macaroni penguin rookery, while the rest of us can enjoy a more relaxed landing at the next bay named Godthul.

With this wind is not easy to manoeuvre the ship into Cobblers Cove through its narrow entrance, with a high cliff on Port side and kelp beds over rocks at Starboard side, and once the Captain gets the ship inside around 08:00h, he prefers to ring the three bells straight ahead, get the hikers ashore and leave the small bay as soon as possible. It is not easy to keep the ship far enough from the shallows and shoreline on this little inlet under the weather and gusting wind conditions that we were experiencing. While the second group stays on board and the ship is repositioned to Godthul, Jordi and our Doctor Leen guide the trek on a steep slope first and then descending to Rookery Point, home of thousand of Macaroni penguins. As usual after dealing with heaps of Fur seals on their way they reach higher terrain, clear of them. A couple of lookout points on the way offer lovely views of the cove, the neighbour Godthul and the Europa making her way there.

Once reached a saddle over the mountains, the wind increase as it blows straight to the slopes facing NW. Up there we found a few Reindeer carcasses, witnesses of the success of the Habitat Restoration Projects conducted in the island for several years. The descend takes place over festuca grassland and tussock grass, following several reindeer paths, until reaching the upper part of the Macaroni colony. First we see the groups of moulting penguins in the thick cover of fully developed tussock, then we shift our view to an open nesting area. And then we struggle our way around the colony to reach the rocky shore. Here the penguins use a couple of rock slabs battered by the big swells and winds, to climb to their breeding areas. Many of them are already dressed with their new set of feathers and start enjoying the freezing waters and the fishing again. What a spectacular sight, that we enjoy for a while. But the rain, wind, sea spray and the timings pushed us to soon start our way back. With those gusting winds the ship is not going to enter Cobblers Cove to pick us up, and we will need to walk a bit further to another beach facing the inner bay of Godthul. All went well and the last bit of the long walk included a real South Georgia experience, making our way across well developed tussock grass area teeming with Fur seals mothers and pups, as a finale for this impressive walk.

The people that preferred to have an easier morning went to the nearby bay Godthul (“Good Harbour” in Norwegian) with Sarah as their guide, for a really nice and quiet landing in a beautiful spot. The Bay is 3 km in length, running between Cape George to the South and Long Point to the North. A cliff amphitheatre carved by the glaciers surrounds the harbour, and extensive scree slopes rise to a height of 500m on jagged mountain peaks. On the site several remains of early whaling and numerous whalebones could be seen partly hidden between the tussock grass. Here, instead of a whaling station, they used as a base the factory ship Aviemore together with two catchers the Edda and Snore. The floating factory operation also was supported with a small land base that included a shed, oil tanks and barrels to ship the whale oil. Wooden boats were also there, used for flensing the whales along the Aviemore. Many of us also climbed a short distance through the Fur seal crowded grasses to a more open space to overlook at the bay from a vantage position. Both groups were on board for lunch as the Europa sails to Ocean Harbour, where the shipwreck of the Bayard lays on the rocks close to the shore. The name of this bay comes from the ship Ocean, which operated in this area.

This place has a special significance for the Europa. Getting into Ocean Harbour reaching the inner area of the bay, the wreck, very similar to our beloved ship appears laying aground along the coast. In 1911 she was blown from her moorings at the old coaling pier at the opposite side of the harbour and, despite rescue efforts, ran hard aground. She has lain here ever since. The year her life ended is the year Europa was built. That is the special link that exists between us. So for over 100 years the Bayard has sat in silence, and for those 100 years the Europa has wandered the seven seas. Today, we share the waters of Ocean harbour. All zodiacs cruised around Bayard’s magnificent riveted iron Barque, built in the Liverpool yards in 1864, before going ashore. As we cruise we can note the similarities and differences in design with our elegant Europa that stays at anchor closeby.

On land we can visit the few remains of another whaling station, but this time almost everything was moved to Stromness in 1920, after operating here for around 10 years. From there we walk towards the rocks where Bayard rests and from there we could enjoy some nice walks over the surrounding hills. The everpresent Fur seals where all around and a few adult Elephant seals were wallowing in mud pools while moulting, and various pups were seen here and there as well. Also flocks of the endemic South Georgia Pintal flew over our heads several times. As the light dims we embark ready to spend another quiet night at anchor after a day full of activities, soaking ourselves more and more on this nature’s bounty that is South Georgia. But not all was finished yet, during eight o’clockie we all gather in the deckhouse to celebrate Harko’s birthday.