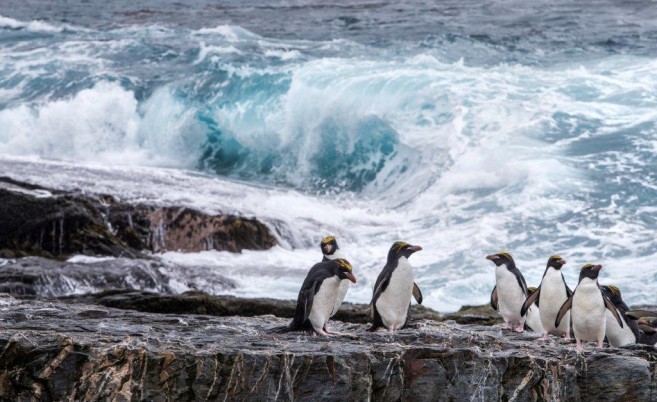 Last night after-party was topped up by strong gusting winds once more. And again Europa has to withstand the blasts under two anchors, that allowed for a quiet night. What we didn’t know was that something was helping us not to drag and maintain our position. It was not until the early morning when heaving Starboard anchor when we figure out the reason of such good holding. With it, a large  piece of debree from the whaling station came up from the seabed. What it looked like an old rusty tank or boiler was well stuck on our hook. The operation to get rid of it took a good part of the morning, and finally it was dropped again further into the sea on deeper waters.

With a bit of delay on our plans for the day, we started our way towards Cobblers Cove, some 15nm away.

On fair winds we decide to et sail and do our activities ashore in the afternoon. Topsails are unfurled and clued down, Fore Top Mast Staysail and inner Jib are hoisted enjoying another notable sailing between both sites separated by 15nm. Before lunch we were about to enter the tiny Cobblers Cove. Sails are taken away and Klaas masterfully steers the ship along the narrow gap between the high cliffs on Port side and kelp beds over rocks at Starboard side.

Once inside the cove, the gusting winds and the reduced manoeuvring space makes him take the decision to head off again and look for a more suitable anchorage around the corner at the entrance of the neighbour Godthul Bay.

There we enjoyed a calm lunch and straight afterwards Europa gets again into Cobblers where landing operations began straight away. Soon we were all on land for a walk over the hills to “Rookery Point”, home of thousands of Macaroni penguins.

At the beach we are welcomed by countless of the already familiar to us Fur seals and heaps of the quieter Elephant seal weaner.

Going uphill on a hard climb over loose rocks, soon a splendid view over the whole little bay reveals as the group pass over a grassy hill shoulder.

An elegant Light mantled albatross couple synchronise their flight over our heads. In the meantime, the Europa makes her way off the cove, going back to the previous anchorage .

The several reindeer paths led us all the way to an evident saddle between the steep mountains. There, as witness of the past years, now gone after the successful Habitat Restoration project, lay several of their carcasses and bones.

Pleasant Festuca grassland slopes bring us downhill towards the exposed North coast. Area that is home for several Giant petrel nests scattered around.

Our way follows reindeer paths until reaching the upper part of the Macaroni penguin rockery. There the penguins are in the thick cover of fully developed tussock, but a several clear spaces are also densely occupied by nesting couples, much easier for us to observe. Many of them are home, lying on their eggs, cleaning themselves or  mutual preening.

Skuas have been busy feeding here, as many broken and eaten eggs are found in the surroundings.

A bit further to the coastline, we struggle our way through the well developed tussock grass to reach the rocky shore. There the penguins use the rock slabs battered by the big swells and winds, to climb to their breeding areas.

From there we started our way back to Cobblers Cove, where using combination of both of our zodiacs we embark the Europa. Shortly afterwards we were already on our way again, now trying to reach the seldom visited Ocean Harbour, where wearied in the late afternoon. After an early dinner Klaas told us about the shipwreck that we could see in the bay. It clearly resembled our ship, her shape and her three masts. The Bayard was built in Liverpool in 1864. One day she was laying at the coaling pier here in Ocean Harbour, when a gale came and blew here of her moorings. The winds swept her across the bay, and brought the robust ship were she now still is. Great efforts by other boats were done to liberate her from the rocky shore grip, and her rudder still until today lays hard to Port on a desperate attempt to steer her off the coast.

Her sturdy iron hull is now covered with tussock grass, creating a perfect nesting site for South Georgia shags. She stranded here in 1911, the same year the Europa was built, creating sort of life cycle connection between us.

Cruising with our rubber boats through the large amounts of kelp guarding the wreck, we could have a closer look at her. Afterwards it was time for a short stroll ashore, where plenty of fur seals and young elephant seals awaited us. We wandered around between the remains of a whaling station. Compared to other bays that we have seen, there is very little left; after operating for 11 years (1909-1920) the Norwegian company merged with another company, and most of the buildings and costly equipment were moved to Stromness. Not only the whale blubber was processed here, but every part of the whale was taken care of. It was here as well that the first reindeer were introduced, and you can still see their impact on the heavily overgrazed grass. The beach would have been the shortest route, but as it was getting dark, and it was covered in seals, we went a little inland. There, the olderst graveyard of the island is located. Actually the oldest known grave on South Georgia is found here, dating from 1820. Sun was starting to hide below the horizon while a bright moon rose over the mountains, in a gorgeous transition between daylight and darkness. Time to get back on board.

Ocean Harbour has the reputation of being the warmest and sunniest bay on South Georgia, and today it definitely lived up to that.

The area offers also a fair spot where to overnight at anchor in the calm winds forecasted for the night. Again just 15nm will have to be sailed during the early morning to reach the famous St. Andrews Bay. There we plan tomorrow morning activity. And on that fashion ends another terrific day at South Georgia, always full of sur