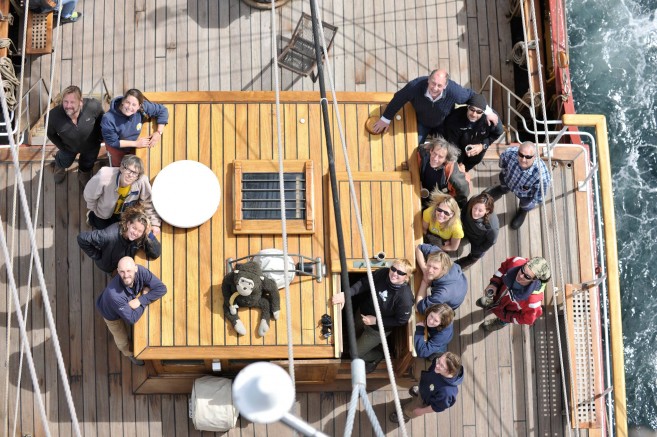 Red watch was “on watch” at midnight on the First of April. As I stood
peering into the moonlight (on look-out) a new sound interrupted my
thoughts emanating from the Deckhouse. Laughter!

April Fool’s day had begun and I thought about how our crew family are evolving as the voyage progresses. Twenty-one countries are represented on-board for this adventure. Whilst the main language for the ship is English, many of our fellow crew (voyage & permanent) are at least bi-lingual. Deckhouse conversations flow from Dutch to German, from French to Spanish, from Portuguese to Norwegian & Swedish. Then there are our “English” speaking cousins from Australia, Canada, USA & South Africa separated by a single language, as someone once said.

Despite the range of occupations, ages, nationalities and genders one thing we are sharing is a sense of fun and humour. April the first is “April Fools” day in many countries and it has focused our collective energies on jokes and pranks.

By mid-day there were many funny stories of pranks across the ship; the missing sail, the upturned bell, the shrink-wrapped soft toys. Some gentle humour that has lasted beyond the first of April. A constant source of fun is the unique way in which we pronounce English words or phrases.

Did you enjoy the Pier (Pear) Crumble?
Lets have some Bears (Beers)!
I could do with a baf (bath)

I ponder how much safer and friendlier the world might be if we could share our common language of humour across the globe.