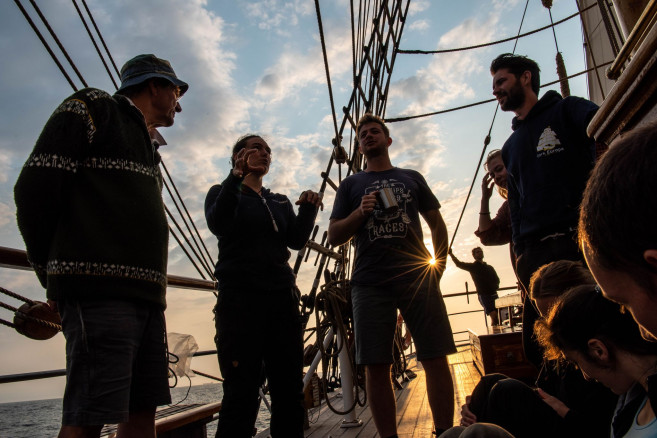 Joining the EUROPA as part of the research team, I was lucky enough to be involved with the international crew quite a lot. And it’s been absolutely beautiful watching the crew in action. Without becoming too melancholic, and as far as it’s possible to be able to describe someone after a week, this is from my experience.

The journey is led by captain Janke (Dutch) and first mate Finn (Canadian). Both possess a calmness and natural leadership which creates a strong feeling of trust among crew and guests (voyage crew). Every day during the eight o’clock update for all passengers – on course, weather forecast (wind only, Janke doesn’t do rain haha), etc. -  Janke communicates very clearly and naturally throws in some humor. It’s a delight listening to her. The same goes for Finn who, with his sailor’s beard and raw but friendly looks, made us feel at ease us through his knowledge and tranquility.

Like on all ships, the cook is our best friend. EUROPA’s cook is called Gjalt (Dutch), and think everybody on board would agree when I say that the man is a living legend. Within a three ‘storey’ range – main deck where food is served, lower deck where the galley (kitchen) is located and the storage spaces beneath the galley – this man rules with a youthful and naughty smile and kindness, whatever the conditions are. The weather hasn’t been too rough on this trip, but it’s not easy working in these confined spaces in a constantly rocking environment. Gjalt is accompanied by his kitchen assistant Lotte (Dutch) who is best described as a hardworking powerhouse with a very generous laugh. The food on board is incredibly good and diverse and is served timely, every meal – especially admirable given the circumstances in which they prepare it for us. Every time I ask whether I can help ‘everything is completely under control’. Amelke and Denice (both Dutch) are the two very friendly crew members making sure we stay hydrated all day every day. Their smiles and friendliness make me feel at home and makes for a high level of hospitality.

The sailing crew consists of seven skilled, knowledgeable and likeable people. They’re led by Natalie (English), who can be heard (quietly) singing and humming around the ship while she oversees things like maintenance and supplies. She seems like a relaxed ‘manager’ with a kind smile, and she is very hands-on. The other woman in the sailing crew is Amélie (Canadian), a hardworking sailor and surprisingly talented singer. On her ‘Sea Shanties’ session she revealed her great voice and musicality. She got the voyage crew singing along with various shanties (sailor songs). Five men complete the sailing crew. Calm and often smiling Cri (Canadian) has much experience on EUROPA. His open face and dry humor are a joy to many of us. Sociable guy Loek (Dutch) executes his work with humor and a good energy. Lars’ (Danish) workshops about all aspects of sailing are impressive, he explains everything very clear. He strikes me like the no bullshit-type who’s got everything under control and likes a joke. Hanjo (Dutch), together with Finn, looks most like a sailor with his impressive beard, long hair, cigarette and the combination of a serious frown and smile. Finally there’s Brian (South African), a sympathetic and friendly dude with a relaxed and humorous attitude and a seemingly easy way of doing his work. Completing the crew is Ed (Dutch), the engineer, or technical guy on board. A friendly, funny, helpful and very skilled man who’s in the meantime running his shop at home.

The permanent crew works on a ‘six on six off’ base, meaning they work six hours and then rest six hours. Watches start at two or eight o’clock. When they’re on watch they’re always working. Not only to make sure the ship is sailed correctly, but also to keep it tidy and clean, help out their colleagues in the galley, teach voyage crew stuff like knots and sail handling and making sure people feel at home. They probably do even more of which I’m not aware now. In addition, they’re always willing to help out when I ask them something.

All crew members share an incredible hands-on ‘can do’ mentality and a responsible and friendly attitude. They work hard without complaining. At least not ‘on stage’. It’s been a pleasure meeting all of them and witnessing the oiled machine that the team is.

In my daily life I mainly work behind a screen. I’ve been doing so for many years now. I’ve been lucky enough to guide many beach cleanups and microplastic sailing expeditions, taking me out of the office. But watching the crew do their physical – at times though - work, virtually always outside, in all conditions, made me wonder what kind of digital human beings we’re turning into. I know I really enjoyed the primal feeling and the sense of humbleness I got from the experience.

Written by: Karl Beerenfenger, a former microplastic campaign and sailing expedition leader currently working at a Dutch NGO enabling conditions for the implementation and scaling up of reuse systems.