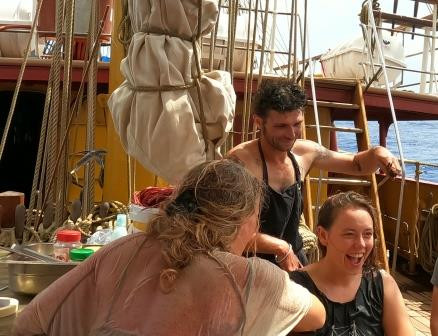 Today started with a number of heavy squalls, moments of serious rain and possibly wind. Sails came down and went up again at a rate to suggest our signalling to other vessels. Which were not there of course.

Subsequently we were invited to the pinrail chase. My notion had been a general running towards any certain pin announced by an official, but there appeared to be more to that; we were entered by watch: red, blue and white teams and a company of permanent crew. Points were to be
gained under judgement of Bosun, who declared himself subjective and assured us he would be cheating.

The competition was fierce. While the first round was indeed focused on being the first team to reach a certain pin the second and following rounds were increasingly difficult because of handicaps imposed by the authorities. Crew team was honoured with extra harassment. Eventually
the teams were required to lower and set the inner jib at speed while Mikze engineered a supersquall with a firehose. Cheers sounded right up to the Brazilian coast when the crew team set out to do the same thing blindfolded and a second firehose was brought to bear.

After all the excitement the voyage crew enjoyed a quiet pre dinner drink. Today the watches were reshuffled for the second half of the journey. The permanent crew sailed the ship to give some rest to our guests. And so it came to be that yours truly steered the ship off into the sunset and wonderfully unknown futures…….

The wind is fair and especially the direction has improved greatly. This brings us smooth sailing and a renewed drive in …maintenance. Scaffolding has been rigged on the front side of the wheelhouse to allow crew to scrape, sand and varnish the wood of the ships nerve centre.
Benches and stairways are hauled up on the sloop deck to be given the same treatment. The grand ol’ lady needs constant loving care and attention and she certainly gets it. Meanwhile all sorts of special marks are reached; the “half-way-mark”, on a square rigger definitely not to be confused with the “point of no return”, the moment of crossing the orbit of the sun, which I would estimate we reach at 11 or 12 degrees south, and, most impressive of course, our crossing the equator.

No less than 35 pollywogs were on board that were severely evaluated by Neptune on His visit to the ship. As always accompanied by a large amount of court members He appeared to know a lot of all the shortcoming of us inexperienced youngsters. Each of us was to undergo a rather personal ordeal, called “test” to decide whether we would be fit to be promoted from pollywog to shellback. Meanwhile things were happening……. His Lowness’ barber seriously affected some…… As before, we sail on to distant horizons……….