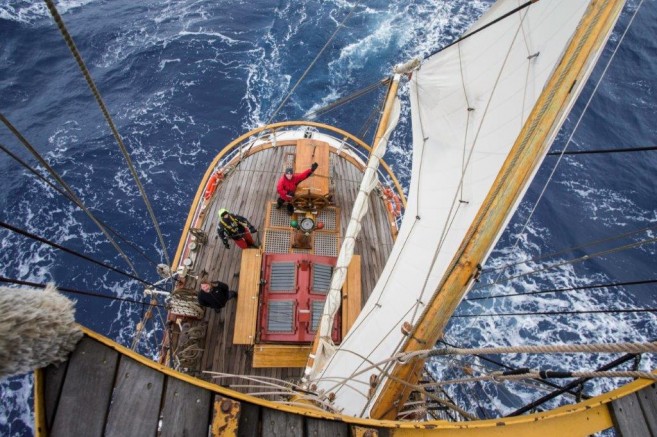 
Winds veering more to the West welcome us to this cloudy and foggy day.
Despite the low visibility the fair winds decreasing to about 20-25kn
from yesterday’s strong blows, allow us to start steering due South and
set more canvas. Outer Jib, Middle staysails and Top Gallants are set,
giving us speeds over 6kn. Likewise, life on board is becoming gradually
more comfortable on the abating winds and seas. Increasing numbers of
people keep showing up and joining the meals, their watch duties or the
talks offered during the day.
On her way, Europa fully entered Antarctic waters, crossing the Polar
Front. We definitely left behind the temperate Sub-polar area and
entered the cold and denser Antarctic waters that sink under the water
mass from the North, producing instability and/or changes in weather
conditions. Today this showed up with smoother sea state, as the
confused short swell became longer and predominantly from a SSW-ly
direction, together with the appearance of foggy conditions, quite
commonly found just South of the Antarctic Convergence Area.
The steep decrease in surface water temperature that all this
represents, indicate a biological boundary for many species as well.
Being already quite close to South Shetland Islands, sure more and more
Antarctic related species will start to show up. So far, the firsts Cape
petrels were spotted during the day, showing their beautiful black and
white plumage while joining us on our way South. Several Wilson storm
petrels seem to enjoy the tough conditions of the Drake Passage, not to
be fooled by their fragile looks; these small birds can be found
everywhere in the South Atlantic and Antarctic waters, further away from
land than many other birds while dealing with the infamous weather of
one of the roughest oceans on the planet.
An introduction to all those species plus many others that can be found
in these waters and in Antarctica itself, was done today by Jordi. In
this talk we could learn about the different seabirds that we have a
chance of seeing during the trip, their biology, their habits and we
were also given some identification tips.
During the day we all continued with the preparations for our soon to
come first landfall in Antarctica. Biosecurity procedures need to be
taken care of, plus the mandatory attendance to the “International
Association of Antarctic Tour Operators (IAATO) Briefing”. Bark Europa,
like all other tour operator companies working in Antarctica, belongs to
this membership organization that advocates for environmentally friendly
and safe touristic operations in Antarctica. That talk sets the rules
and a code of conduct for touristic activities, in the frame of the
Antarctic Treaty agreements. Good to have it today as we just have 110nm
to cover until arrival to our first planned spot to land in the South
Shetlands, after having sailed 112nm during the last 24 hours.
The gradual wind shift during the day, veering to a NW-ly in the
afternoon and steadying to around 20kn, let us set all the remaining
canvas, but the Gaff Top sail. For the first time on this trip Europa
unfolds practically all her sails, and braced Close-hauled on Starboard
tack attains speeds over 8kn, thus providing a chance to try a landfall
tomorrow afternoon.