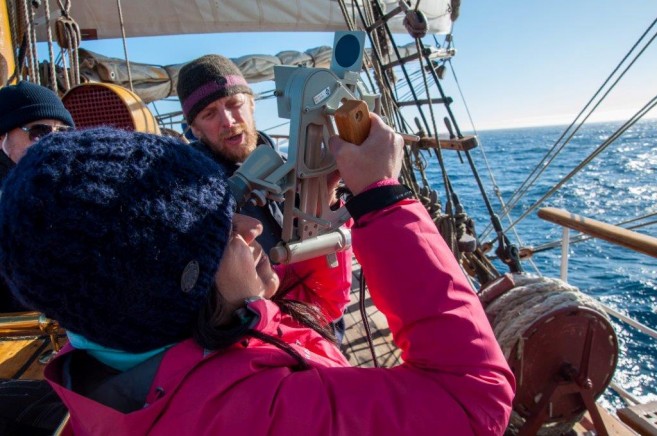 under variable weather and wind conditions

Europa spends the night inside Deception Island, holding her ground against increasing winds under two anchors, each one with four shackles of chain over the loose volcanic bottom of Whalers Bay. It was at 4:00h when she motored her way off the island through Neptune’s Bellows, to find fair winds out in the open waters to start setting some canvas.

The plan for today is to sail to the Antarctic Sound through the Bransfield Strait. This body of water is about 80nm wide, it extends for 200nm in an ENE-WSW direction, separating the South Shetlands from Trinity Peninsula and the Joinville Island group, off the N tip of the Antarctic Peninsula. This wide-open waterway is named after the Captain Edward Bransfiled, whose history is intimately linked with the discovery of the South Shetlands and the Antarctic Continent. Although the South Shetland Islands were firstly noticed in 1819 by the merchant captain William Smith, it was necessary to return several times to confirm and explore the archipelago. On one of those occasions he was accompanied by the British Admiralty Captain Edward Bransfield on board the ship “Williams”. Then, besides discovering some more of the South Shetland Islands, on the clear day of January 30th, 1820, they could see the mountains of the Antarctic Peninsula. None of them were aware of the great importance of this land sight. Actually, they just discovered the until then mysterious and elusive Antarctic Continent. Yet there is a parallel story, coming from the far Russia… In July, 1819, Captain Bellingshausen departed Kronstadt with two ships: the Vostok and the Mirnyi. First stopping at South Georgia, then they continued to the known but virtually unexplored South Sandwich archipelago before heading South, just to be stopped by thick sea ice when they spotted land. Their sight of the Antarctic Continent is logged on the 27th January, 1820, three days before than Edward Bransfield.

Leaving controversial stories behind, the Europa deals with variable winds and changeable weather for the whole day, trying to make her way through the strait.

In the early morning, fair NNW-ly winds up to 25kn seems to augur a great sailing day, although the low temperature and the light rain make shiver the hands available on deck. Top sails, lower staysails, courses, Top Gallants, head rig, lower and middle staysails, gradually are added to the configuration, as the ship reaches a good speed of about 7kn. But at dawn we can all feel the wind dying, and soon it just blows a light breeze of 3 or 4kn having veered to ENE-ly. One engine starts, and Top gallants and Courses are clued up. It was not until after morning coffee time that the wind comes back, gradually increasing. Then we can put in practice the lessons recently learned after the sail training talk and hands-on that just finished, and set all canvas, after more proper instructions on unfurling sails. Still all under foggy weather and drizzle. Under these conditions, the engine is turned off again and we sail once more. Now the sail training is resumed under warmer an sunnier weather that in the morning. Along the afternoon Europa leaves behind the fog-bank where she was immersed and sails under the sun and blue skies, while the wind backs to W-ly, making us brace squarer, drop staysails and clue up the Main Course. Busy doing so, wind also decreases until is necessary to turn the engine on again to keep some speed towards the Antarctic Sound. And when it looks like we will enjoy a great sunset, Europa sails straight again into the low clouds and thick fog, reducing drastically the visibility.

During the small flocks of Southern fulmars fly around the ship, and several Humpback whales are sighted at the distance. Now just finishing their feeding season here in Antarctica and soon starting their migration northwards to the tropical and subtropical waters of the Pacific coasts of South America.

Hello, Safe travels to my good friend Archi and everyone onboard! How are you all, especially my friend Archi managing without the smart phones? Lol. Best wishes to all! Serey

What a fantastic trip! I've been keeping up to date with my Dad Wayne who is currently on the ship and am very jealous! Hope you are having a great time Dad! Lots of love from New Zealand x

What a fantastic journey this trip is! I really enjoy reading the stories. Greetz to my friend Margot.