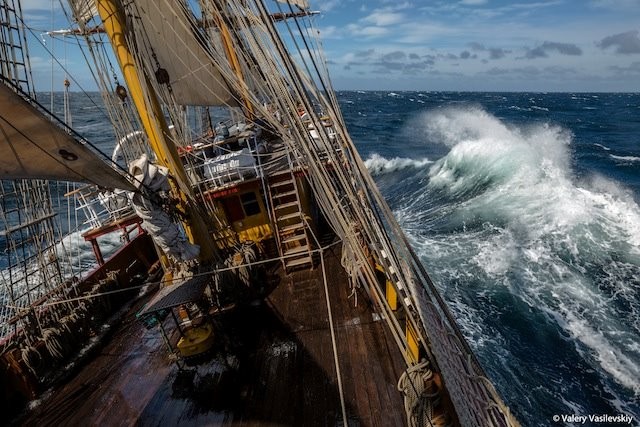 Travelling for 7-1/2 weeks on a ship with limited storage and cooking space left some of us wondering initially if we’d be delighting in tinned ravioli and the likes for days on end and eventually wither for lack of fresh greens.

We needn’t worry it turns out and in fact Gjalt and Bear, our chefs, make dinner and all other meals a real culinary delight. Breakfast buffet comes with fresh bread baked overnight, granola, yogurt, jams and butters, cheese and ham and a varying breakfast dish of the day, from pancakes with syrup to scrambled eggs with scallions to bacon-y fried eggs. Most delightful after an early morning shift on deck, but even during our current lazy phase worth getting up for. Lunch is a soup and sandwich formula – bread, butter, cheese and cold meats. But there is always a special dish as well ranging from empanadas to crostini to salad to pizza to leftovers from previous dinners.

Amazing how many different soups the team comes up with, so far no repeats and some interesting discoveries like spicy peanut or French parsley soup. In the afternoon we also enjoy a cookie and tea/coffee break. Peer has been warning us of cookies running out during the trip and keeps a strict rationing regime – take more than one or two and fear his wrath… But the team is well able to resupply as evidenced by the bear and whale cookies made by the team lately. Dinner is the star of the day with a delicious main – meat or vegetarian and desert. Here the skill of the kitchen team truly comes to light, they never failed to deliver even when the waves were making Bark Europa roll like crazy. What must it be like cutting veggies and boiling water in those conditions? Cooking becomes an extreme sport of sorts for sure.

But eating also requires some skill here. Firstly, making it to the front of lunch and dinner queue in a Darwinist environment whilst maintaining the illusion you are a good sport requires some cunning. A quick shower 12.40ish and you just happen to stumble to the front of the queue afterwards? A quick coffee at 12.55 just in time to combine with a soup and sandwich grab? And that is only the start of the fight – making it back to the table without spilling more than 50% of the contents of your plate when the swell is up is rather impressive too. Dutch cuisine is taking more shape in our minds now, well the non-Dutchies among us passengers anyway. And yes, apparently it is more than just potatoes… And influences from wherever Gjalt and Bear take tasty inspiration from. Even Sauerkraut which I’d usually reject with aplomb was made into a pretty edible pot pie sort of dish, I wolfed down the plate after a long shift with delight. Steak dinner was a highlight recently with everyone queuing up for seconds pretty much. No boring food so far and we count on the kitchen team to make those veggies and fruit last till Cape Town! Oh and lastly but not least – super yum deserts served every night. Coconut mousse, apple tart or the all-time favourite plum crumble (PS: Bear is willing to share recipes). Served up during the 8 o’ clocky or a highlight – slice of watermelon while on watch at the helm. They are stars – our perm crew!