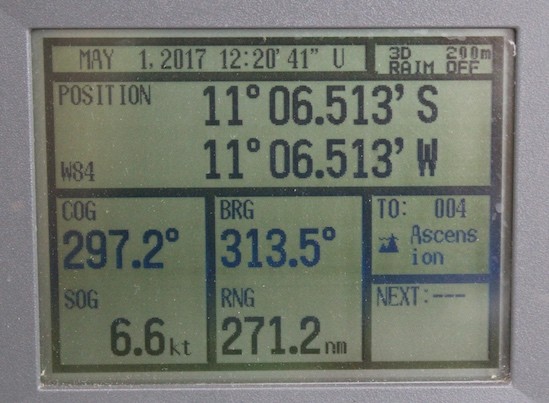 1st of May 2017, day 18 at sea. We have been sailing through a moderate sea and enjoying of fairly good weather conditions. The only concerns of Klaas, the Master and Finley the 1st Mate are the distant showers in the horizon, which can be seen clearly through the radar's screen. Both of them have been keeping a watchful eye on the development of the squall and so far, the squall have remained far from our current position.

The conditions for sailing at the moment are stable, with a wind from the East force 3-4, which is pushing the ship gently through a moderate swell that comes from the same direction. Because of the direction of the incoming wind, we have set the square sails in the fore and main masts as well as the studding sails in the fore mast. Also, the flying jib is up and the mizzen mast we have set the spanker and the gafftopsail.

Today we are about two thirds away from our next stop, Ascension Island. Ascension Island is a remote island on the South Atlantic, it belongs to the British Overseas Territory of Saint Helena, Ascension and Tristan da Cunha and is far from anywhere you can think of, being the closest land, the island of Saint Helena located 1300 km south east. The closest continental land is Cape Palmas in Liberia, located 1500 km to the east in the coast of Africa.

as we move west from Greenwich. As the two numbers are slowly growing to eachother.

our number in longitude. Shortly before noon, our GPS receiver showed us the curious position of 11°06.513’S, 11°06.513’W. What are the odds of having that position during the trip like this? Well, the odds are not so low and there is a slight chance that we may get that position again during our trip as we move north after our call in Brazil.