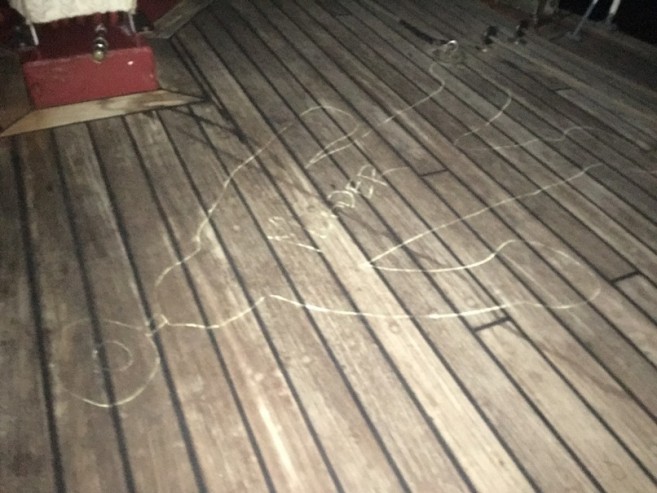 On 19 October, we crossed the equator. One day later, after being delayed due to his malfunctioning GPS transponder, Neptune visited us with his cronies. We all try to forget this day. We have, of course, be sworn to secrecy, however some of us are most definitely more nervous now when hearing hair clippers somewhere. Appetite for seafood seems to have declined significantly as well. But we are happy to now be part of his kingdom.

After nine more days of sailing, we are still at sea. No sign of land, or any kind of rescue. We try to keep ourselves entertained with games of advanced rules Uno and ditty bag shenanigans. Rensje has assured us that the food will last for another two weeks, but we might run out of hagelslag. Marie the ship's doctor is looking more worried every day due to our ever increasing biscuit consumption. But at least we won't die of scurvy because all the lovely birthday apple pies contain all the vitamin C we need.

Finally, after eight days of sailing the trade winds, all crew having become utterly lethargic from inactivity, some sail handling was required causing several issues. Our calluses from pull up bar exercises were tested on the bracing lines. Turns out that those calluses are inferior to the real deal. Another problem arose when the yards had rusted into place. But Yaniv, Roy and Colin's training regime paid off, and brutal man power dislodged them once again.Three days ago, some murderous game seems to have taken hold of the crew. We are still unsure what the cause might be, but the prevailing theory is a bad case of post equatorial stress syndrome.

Yesterday, after losing nearly the entire crew, we also had to say goodbye to Ewan, one of our beloved deck hands. Santa Claus ambushed him with a deck brush after waiting patiently under the unfurled fore topmast staysail for days. That same morning, Europa playboy Laurits kicked the bucket following an unexpected encounter with the Aap staysail downhaul line in the lounge. Word has it Strong Andy had something to do with this. Paranoia has set in for sure. Ship's bosun Matt is now walking around surrounded by a minimum of two bodyguards. He himself is most certainly not innocent as he ganged up on ship Casanova Roy, who was kangarooed to death by anti-whaling campaigners.

Who will be the next victim? All we can do is be vigilant, not sleep, eat with our backs to each other in a circle. And. Not. Trust. Anyone. Once you’ve encountered life on board Europa, trust us, you wouldn’t want it any other way.