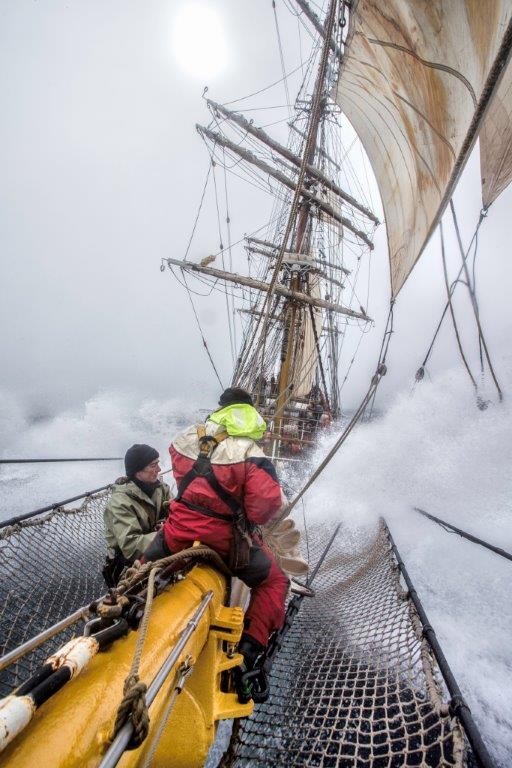 5th December 2017 Dealing with an approaching Low Pressure System. Wet and foggy weather on our way to Elephant Island.

Orca pod of the rare “type D” pay us a visit

Already yesterday at dinner time the wind started to back to the West. Tendency that continued during the morning early hours. From having all our canvas set plus the help of both engines to get quick to Elephant island, trying to avoid on that way the forecasted strong winds, now all Squares were furled together with the higher Staysails and the Gaff Topsail. Still both engines roar as we sail on a straight course towards the historical Point Wild, our next place for an activity off the ship if weather allows.

The foggy morning didn’t let us spot the large iceberg we passed, even though it was pretty close, at less than a mile, just the radar was catching a reflection out if. But what the lookouts seen were a few bergy bits and growlers, all drifting after falling apart from the larger berg. Those smaller pieces present a threat to the navigation and care must betaken when sailing amongst them. Permanent ice-watch lookouts are sent up the rig to have a better view. The temperate Pacific winds can quickly produce those fog banks as they hit colder surfaces. On that case seems like the large iceberg closeby is hiding behind the mist that is producing itself.

At that point, facing big swell and 18kn of W-ly wind all sails are taken down and furled, but the Spanker and the Aap over the main deck, to steer around the iceberg and reach safer waters.

As soon as we finish this detour, Lower and Middle staysails are hoisted again, together with Inner and Outer jibs. Before all those manoeuvres it was found that the Top Mast Staysail had lost the stitches on a couple of its seems. Soon the sail was taken away from the Bowsprit and brought to the improvised “sail making and repairing room”, actually our ship’s library.

One of the main jobs during the morning was to find a replacement for this important sail that gives us stability and speed. Crew pulls off the substitute from storage place in the Fore peak. As a matter of fact we will set what in theory is the Inner Jib in the stay of the Fore Top Mast Staysail, while the latter is on repair. In the original home for the Inner Jib we have been carrying a smaller Storm-jib since a few days ago, being the Inner jib available to replace the damaged canvas.

Boatswain Katelin, Deckhand Vai and Belén the guide spent a busy, cold and wet morning riding the bowsprit bending-on the sail, while Europa pitches as she rides the wild seas. As soon as all is ready, the watch is called on deck to hoist it.

Thanks to the speed achieved yesterday, when all canvas was set, helped by our two engines, we covered a total distance from noon to noon of 156nm, at an average of 6.3kn. Just 158nm left to arrive to Elephant Island. We still need the maximum speed we can achieve to get there as soon as possible. The Low Pressure system that we saw on the recent forecast had speeded up on its course, bringing now veering winds, and is expected that the NW-ly winds will go round the clock, becoming first N-ly and then stepping to the E-ly quadrant.

And it all started to happen during the evening, when N-ly winds of 15to 18kn gave us the chance to start setting more sail. Already after midnight again the Europa motor-sails with everything she has towards Elephant Island, leaving behind a large iceberg that had lost several smaller pieces. Besides the voyage crew watches there deck, permanent crew members were sent up the mast to have a better view and keep a sharp lookout on those growlers and bits of ice.

Between all day’s adventures, before dinner we had an unexpected visit of a pod of Orcas. But looking at them we could clearly see that those animals were not the classical Killer whale we are used to recognise from other sightings, documentaries or aquariums all over the world. It happens that at least in high latitudes, the Orca communities are often comprised of different ecotypes, non-interbreeding populations, that differ in their prey preferences, social structure, acoustic behaviours, and morphology. On todays’s case the animals showed a noticeably bulbous head, their dorsal fin was narrow with a sharply pointed tip and backswept and most distinctively their eye patch was very small. We were lucky enough to encounter the so called “type D” Orcas, the “subantarctic killer whale”.

This recently recognised “type D” has been described not long ago, based on photographs of a 1955 mass stranding in New Zealand and very few sightings since 2004. Its geographic range appears to be circumglobal in subantarctic waters between latitudes of 40 to 60º S. and although nothing is known about the type D diet, it is suspected to include fish, as our sighting also seems to point at, as Fin whales were also seen around, the latter feeding mostly on fish as well.

A really good sight that surely will contribute to the better understanding and improve our knowledge about this rare type of Orca.