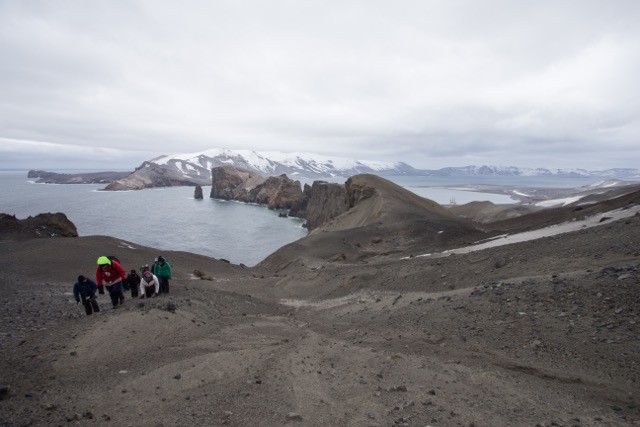 After enjoying this surrealistic Antarctic site we were staring to get cold as the temperature dropped to minus 4ºC, snow started to fall and the wind stared to blow harder as well. So the zodiacs were called to bring us on board. In the meantime the group leaded by Jordi and Skinner were up the Deception mountains on their way to Baily Head.

The walk climbs up over 300m of altitude through the desolate landscape along the valleys and slopes of Deception Island, reaching a couple of great viewpoints over the inner side of the caldera and the outer rim as well, before heading straight on a NE-ly direction to the headline called Baily Head. The way there took just over an hour and a half in total, but some of us came back to the beach after reaching those lookout points. Cold temperature, the steep terrain and the increasing wind just left the hardcore hikers group battling those adverse conditions on their quest to the largest Chinstrap penguin colony in the Antarctic Peninsula.