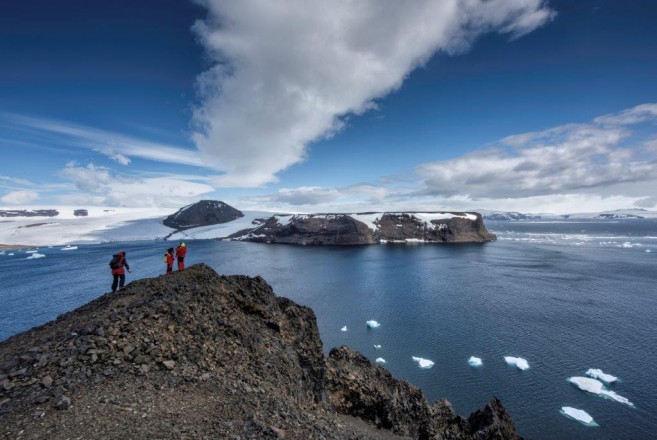 The Erebus and Terror Gulf welcomed us with variable but good winds after our landing at Paulet Island. Setting Topsails and Dekzwabber we could sail almost all the way until reaching the north coast of Vega Island, where the smaller but beautiful Devil Island is nested in a wide bay. During the sailing we could enjoy the glaciated scenery and the islands and coasts around us. One of the most eye catching island we pass by is the typical Rosamel. With its circular shape, it is just 1nm in diameter with precipitous cliffs of volcanic rock rising to a snow-covered peak 435 m high, lying in the middle of the Southern entrance to Antarctic Sound. In a few hours of nice sailing we arrived to our destination, where after scouting for a while trying to find a good place to spend the night, our mate Jelte dropped the anchor in what turned out to be a perfect spot, sheltered from the prevailing N-ly winds and from the large drifting icebergs, that stop their way on a shallow bar. Pretty scenic as well, South of us we enjoyed the views of the large glaciers and mountains of Vega Island, on the opposite side of the sound, Devil shows its desert appearance and the two mountain tops, like the devil’s horns, that gave its name to the Island. A good night at a anchor promised a good sleep after the few drinks taken for the very successful South Georgia Auction that we did in the afternoon. And so, by early morning all was ready for our landfall at this fantastic spot, home of Adélie penguins and with great hiking chances. As usual, following a good scout of the area by our guides, we were
called to start operations. Sunny weather, blue skies adorned by some high clouds and windy conditions welcomed us to the area. On land, we set foot on a little volcanic beach at the foot of a steep snow field leading to a plateau. An easy short walk through the seemingly barren land of the south of Devil, lead us to the saddle between the two peaks of the island. From there the panorama changes radically as the views we get are over the open waters of the Weddell Sea, James Ross Island at the background and the lower slopes of Devil covered by nesting Adélie penguins. Descending towards the rookeries, we spent a while watching the evolutions and doings of the inquisitive penguins, many of us delighted to see some of the recently hatched chicks. Until now, in the rest of the Antarctic colonies visited during the trip, the penguins were still sitting on their eggs. Here the little chicks were already demanding
their first meals regurgitated by their parents, under the attentive eye of hungry Skua’s. From there our guides proposed to walk up the peaks of the island, the Western one representing an easy way up to a superb lookout point, the Eastern top being more difficult over a narrow rocky ridge. Both peaks are fringed by basalt cliffs on their north facing side creating an amphitheatre effect on the north shore where the penguin colony is located. The peaks slop off to the south where our landing site is located. Wonderful morning in this remote and isolate place amidst the emblematic islands of the northern Weddell Sea. Next was to heave anchor and start moving northbound to the Antarctic Sound, to try our luck for a landing at Brown Bluff, a spot located on the east side of the Tabarin peninsula, in the Antarctic continent itself. Before that, our way took us through the scenic Fridtjof Sound, leaving at our Port side the vertical front of the glaciers that cover that northern area of the Peninsula, and at our Starboard side Andersson and Jonassen islands. After this impressive passage it was not far until reaching the windy shores facing Brown Bluff. While having an early dinner, as the plan was for a landing after the meal, Europa drops anchor under the towering rust-coloured bluff flanked by vast glaciers. In front of us, right under the cliff extends a 3.2 km long beach of rock and volcanic ash, which provides adequate terrain for Adélie and Gentoo penguins to nest. Since the moment the anchor went down, the ship started dragging under the strong winds, gusting over 30kn. Luckily the usual concentration of icebergs and sea ice that often guard the open bay, where not there, and we got space enough to drag away from the treacherous shallows located close to shore. While the captain struggled to keep the ship in a good position, our guides take a zodiac to scout the conditions and the chances to set foot ashore. Wind and waves splash wildly over the boat as soon as they start their way. They made it all the way to the landing spot after a rough ride, just to realise that breaking swells crashed over the brash ice along the coast. Assessing the situation ashore, increasing gusting winds by the minute, wild zodiac ride and difficulties to properly anchor the Europa, soon the decision is taken to cancel the evening activity and start our way out off the Weddell Sea, first through the Antarctic Sound, then across the Bransfield Strait towards the South Shetland Islands.
Under variable winds blowing while the sun sets, the dekzwabber is set before bracing sharp on port tack, helping our engines to get us along the sound. Being 11-19 km wide, it runs in a NNW-SSE direction for 53 km. It separates the extreme NE of Trinity Peninsula from Joinville Island, D’Urville Island, Bransfield Island, and Dundee Island. Dumond d'Urville first sighted its northern entrance during the French Antarctic Expedition during 1837-1840. Nordenskjöld's Swedish Antarctic Expedition (1901-1904) navigated and charted the sound. They named it as 'Antarctic Sund' for Carl Anton Larsen’s ship 'Antarctic', which, in 1902 became the first vessel to sail in this sound, and was crushed by the ice the next year.