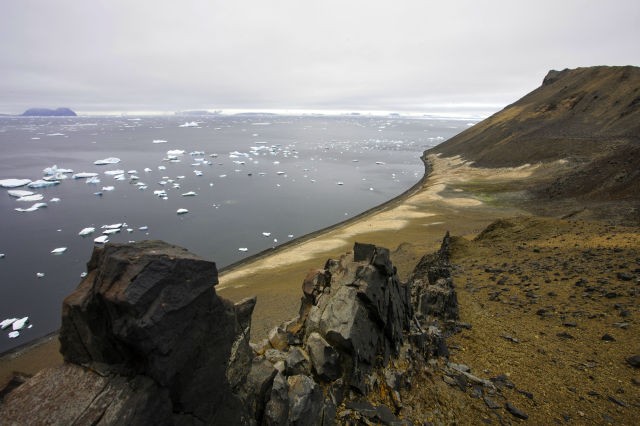 Sailing through Erebus and Terror Gulf during the evening and part of the night, we dropped anchor in a small cove located in the north coast of Vega Island, in the place where the Prince Gustav Channel and the Erebus and Terror Gulf meet. On several occasions during the dark hours we come across thick bands of ice, slowing us down and we have to navigate with the ice-lights located at the tip of our bowsprit turned on. Icebergs, tabular icebergs and an increasing amount of sea-ice pass by close to the hull as we make progress to our destination.

Sometimes it looks like we will not make it, other times more open waters cheer up our spirits, and eventually after midnight we found ourselves rounding Devil Island and dropping anchor. Devil nestles in along the north edge of the much larger Vega Island, and they are separated in three sides by a narrow (kilometre wide) channel. The island consist of two conical hills, each about 220 metres high with a saddle around 70 metres high between them. The island probably owes its name to its two "horns" looking somewhat like a devil's head. The beach comprises many pebbles and cobbles. It makes a good nesting area for the many Adélie penguins, an estimated amount 0f 15000 to 20000 couples. The north-east top has a fine exposure of columnar-jointed basalt. The columns are 10-15 cm in diameter, some horizontal, others steeper. The slope of the hills is covered with scrabble scree of small fragments of basalt.

The rocks on Vega Island, like those at Brown Bluff and here on Devil Island have all been classified as part of the James Ross Island Volcanic Group, ranging in age from the Miocene to Recent. Thus they have been emplaced between twenty million years ago and the present. After a quiet night at anchor on a shallow patch amongst grounded icebergs, all was ready for landing after breakfast, under cold temperature and overcast sky. Once we found a suitable landing spot on Devil Island’s Southern shores, the group proceeded to climb the small but steep scree that surrounds the island. Once we overcome this first obstacle, we proceeded to walk along the saddle that joins the two main peaks of the island. The walk was led by Annukka in the front, Jordi in the middle and Eduardo was sweeping the back. Some Skua’s, still taking care of small chicks nest at the saddle. We cautiously looked in every direction in order to keep a safe distance from the nests. Looking Westward from there, the cliffs of Cape Well Met in Vega Island are clearly visible. The name of this dark conspicuous headland commemorates the long delayed union at this point of a relief party under Dr. J. Gunnar Andersson and the winter party under Dr. Otto Nordenskjöld after twenty months of enforced separation.

A few hundred Adélie penguins were seen still roaming around their nesting sites. After enjoying the spectacular views over Erebus and Terror Gulf, we continued our walk which aimed this time for the west summit. The walk went well and most of the voyage crew reached its highest point. Terrific scenery surrounds us, the already mentioned Cape Well Met, the sound where the Europa lays at anchor, the north-eastern part of the Weddell Sea and even the distant Paulet Island is noticeable amongst what look like heavy ice conditions from here. Up the peaks, there was a gentle breeze and the temperature, despite it being cold, was still comfortable. After a few minutes of contemplation and picture making, we started our way down, back to the saddle point towards the east, there a small group of non-climbing voyage crew was waiting for us. After joining them, the group was split in two. The ones wanting to come back already would make their way back to the ship while the other group would be aiming to climb the east hill of the island. Annukka led the group back to the zodiacs, while Jordi led the climbing group and Eduardo closed it. Once Annukka's group was on board the zodiacs, she would join the climbing too. Steep slopes covered on loose rocks brought us to a narrow ridge that we follow until reaching the summit. The view offers another angle towards Cape Gordon, at the eastern tip of Vega and the openness of the Erebus & Terror Gulf.

After making the respective pictures the group was joined at the summit by Annukka and started to climb downhill to the landing beach. Once on the zodiacs we had the chance to stop by a big female Leopard seal lying on an iceberg, before driving amongst icebergs back to the ship. Anchor is heaved straight away and after a short meeting, Eric, his mates and the guides decide to try luck and push our Old Lady for 37nm southwards into undetermined ice-conditions trying to reach the coveted Snow Hill Island. We heard so much already about the place where Nordenskjöld built the hut for overwintering with his crew in 1902, that we all feel quite eager to reach it. In case we can make it there, it will be our southernmost latitude during the trip. That means spending the afternoon and evening motoring into light southerly headwinds, on the icy waters of the Weddell Sea. Luckily wide areas of relative open water are found, and just in a couple of occasions we have to cope with heavy ice conditions, crossing bands of multi-year sea-ice where bigger icebergs are embedded. Huge Tabular icebergs are widespread on the waters south of Erebus and Terror Gulf. Between them, many areas of relatively easy navigation give us the chance to spend some time manoeuvring to get a good view of a group of Orca’s. Two large males, a younger one, a female and her calf travel together in search of food on these icy waters.

They don’t seem to be very interested in us and are mostly minding their business and soon disappear behind icebergs and bergy bits. Looking at their colour pattern and the marked saddle on their back, they belong to the type “B” Orcas. In the world, there are seven ecotypes of Killer whales. Three of them in the northern hemisphere (called Transient, Offshore and Resident), while here in the South we can find four types, A, B, C, and D, being “B” the most common ones along coastal waters of the Antarctic Peninsula. Quite surprisingly we make quite good progress southwards, where we were actually expecting heavier ice-conditions. But actually by dinner time we are already at the northern tip of Snow Hill Island, sailing along its high cliffs until reaching a wide valley cut through them. A closer look reveals Nordenskjöld’s hut standing on a small hill above the flat beach. Cautiously approaching the shoreline we find a good anchor spot on a shallow platform before nightfall.

With all the ice we have seen around since arriving to Antarctica a few days ago, and today’s overdose of icebergs, bergy bits, tabular, multi and single year sea-ice, our guides Annukka and Jordi deliver a talk on the ice subject after dinner. Instead of having a quiet relaxed night at anchor, like last one at Devil Island, here the conditions are more challenging. Large amount of ice drifts southwards between James Ross and Snow Hill Islands, now under 15 to 20kn of what just turned to be N-ly winds. Several times we need to start the engine to swing on our anchor to avoid ice sheets drifting into us at over 1.5kn of speed.