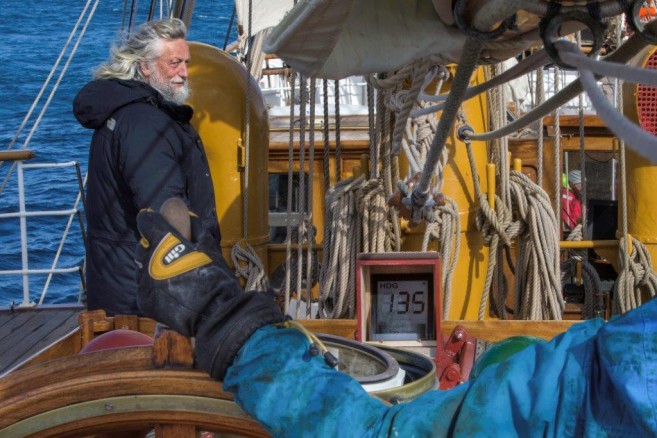 I had told my friends that I would be sailing on a tall ship to Antarctica and that I would have no internet, no email, and no Facebook for over 5 weeks. Europa would be a clinic administering a digital detox.

The atmosphere amongst the voyage crew would be like the old days in the boisterous common room of a Youth Hostel. We’d sing songs together, chat amongst ourselves, play cards or board games, while quieter types would sit in a corner sketching ships, seals and penguins. According to Europa’s brochure I might even break my dependency on GPS by learning some astro-navigation.

On Europa’s poop deck I found the helmsman with eyes rigidly fixed on the iPad display showing Heading, SOG and Apparent Wind. Less than a metre from the helmsman the ship’s compass pointed to the magnetic pole, while on the mast above the Europa flag indicated the wind – both instruments unseen by the helmsman.

My eyes fell on the bridge below. Books and paperwork covered the chart, while the Mate stared at the chart plotter.

Two voyage crew sat opposed across the table in the Poker Corner, yet their concentration was not for a handful of playing cards, but for their digital photos on their laptops.

In the Library a guitar hung on a wall amongst equally mute model boats and ships in bottles. Earphones hissed an anonymous MP3 audio file in the ears of a grey bearded man nearby. A box of board games and playing cards lay forgotten, like possessions preserved in a childhood bedroom long after the child has left the parental home.

My will to kick the electronic drug by a digital detox failed. I double tapped on the Chess app and challenged my iPad to a game.