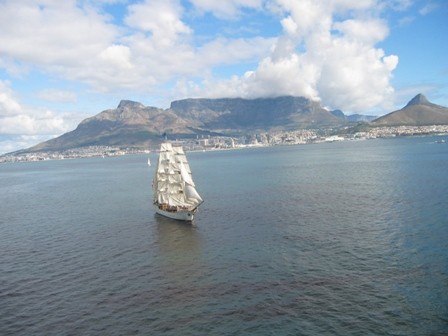 I’m on the white watch, from 12 to 4 and my favorite place is up on the bow doing look out duty.

I am a phycologist by training which means that I study seaweeds (amongst other things) and will admit that I am only just beginning to discover the joys of birding. But I will be honest that now that I have an interest I know that I will be making several people very jealous with the birds that we have been seeing on this trip and my birding life list is getting some very special additions.

We departed from the wharf on a very misty Cape Town morning, but as we passed the Cape Town clock tower the Kelp gulls and Caspian terns suddenly started a cacophony of noise as if to say “You can’t leave without us saying goodbye”. While we were bunkering we were able to watch their aerial antics as they caught fish in the harbor and then had to defend their catch from birds who thought it was easier to steal fish than go fishing. In the harbor we saw Cape and common cormorants and were even given a display of formation flying by pink backed pelicans. As we passed Robben Island I spotted some African penguins, who were probably out foraging from the island. I could cheat and say that I saw a rock hopper penguin (but that was at the Two Oceans Aquarium).

When we passed Dassen Island I saw a few Hartlaubs gulls. The next day despite the roly poly conditions I saw the first of many albatrosses for the trip. We were treated to amazing flying and soaring displays and the birds dipped and rose of the waves. We saw wandering, brown browed and royal albatrosses and they often circled the ship. My poor watch mates watched me move from side to side in an effort to raise my binoculars to try and identify the birds.

But after the third day the most amazing thing happened there were suddenly five new twitchers on the foredeck and identification books and arguments about what was flying around us abounded. So our bird list now includes, Cape gannets (I personally was amazed to see them so far out to sea), British storm petrels, black bellied storm petrels, brown boobies, great winged petrels, grey petrels, something we know is a tern, but it hasn’t stayed in our binoculars long enough to identify it. I am looking forward to getting to St Helena, where I hope to see some red billed tropic birds and a fairy tern. I missed seeing one when I was last there in 1998, so am looking forward to adding it to my list.