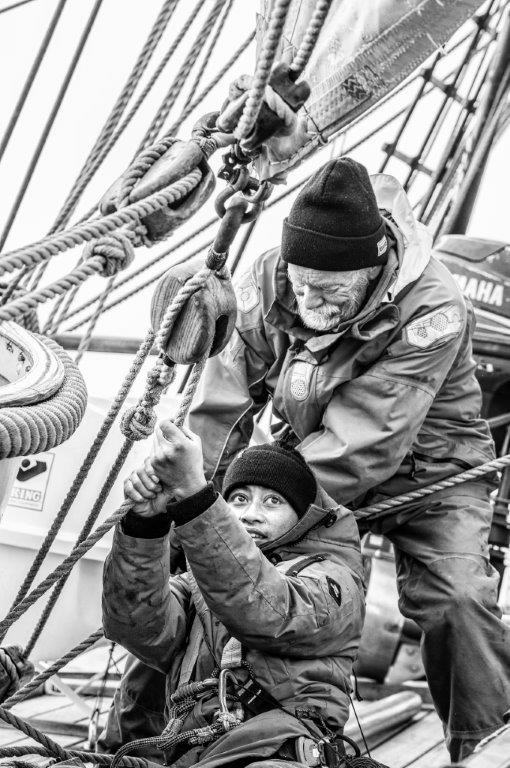 After motor-sailing a few hours with all our canvas set, on 15kn of  E-ly winds, early in the morning we clued up courses as the wind backs to SW-ly and eases down. The main sails were the first ones to strike, but soon follow the rest of the canvas, spending half of the day motoring over the calm seas and light breeze, unusual way the Drake Passage welcomed us.

With this combination of motoring and sailing we have covered 140nm during the last 24h. 342nm still left to reach Cape Horn, which we will try to spot closeby before heading to the Beagle Channel.

Slowly but surely on our approach to the Southernmost point of the Americas, it was time today to broadcast the great documentary “Around the Horn with the Peking”. Filmed in the late 1920’s by Irving Johnson (by that time on his first serious sailing adventure) shows the rigours of the trading under sail between Europe and Chile, on one of the last famous cargo-tall ships. Afterwards, the author became Captain, when he retired, films from his youth were rescued and then he seasoned them with his peculiar and entertaining narrative.

As a difference with the wild images filmed during this trip on board the Peking, Europa today tours on what we can call a “Drake Lake”. Not often we can enjoy such calm conditions when sailing this treacherous waters. Not to trust though, the feeling hoovers in the air that seas are being kind at the start of our crossing, just to let prepare ourselves for harder situations soon to come.

For the ones eagerly willing to sail, the chance started to take shape during the afternoon. 14 to 15kn and gradually increasing SW-ly winds asked for setting again all our canvas, brace Close-hauled on Port tack, and while steering on a 310º course, stop engines. How pleasant it is to get back to the climbing and pulling ropes, as the canvas spreads to the fair winds, hence letting our Old Lady Europa to do what she likes best, sailing over the oceans, thanks to our efforts. But it seems it won’t last long.

For the moment we still steer high on the wind on a WNW-ly course, and will follow it on that tack while it veers. Regarding the forecast, later on the wind will turn to NW-ly, then N-ly and during next night or early morning will become even NE-ly increasing considerably in Force.

But until then, Drake kept playing a quiet game, inviting us to sail deeper into it before switching its mood. Actually the good sailing breeze eases down gradually and therefore our speed as well, and by the evening one of our engines roar again over the calm seas, to keep a fine average speed

The good ocean state allowed as well for a fire drill, always good to keep the crew trained and ready in case of a real emergency. Alarm ringed .after lunch and quickly we muster on deck while the permanent crew members exercise their fire-fighting skills.

Being the weather favourable to continue with the lecture program from our guides, today Belén finished her talk on Working with Humpback whales “Does whale watching affect humpback whales? “

Whale watching tourism has become one of the major economic incomes of some countries and also regional areas. One interesting case is Húsavík in Iceland, where the local economy rely greatly on this particular sector. However, the increase of whale watching boats and underwater noise might disturb the whales leading to the eventual departure of these giants to other quieter feeding grounds. In this talk we discover that humpback whales do change diving patterns and reduce the number of feeding attempts when they are close to noisy whale watching boats. The usage of modern acoustic tags not only allow us to understand if we are disturbing the whales in their natural environment but also to discover new amazing whale vocal sounds including possible feeding calls or mating songs barely described before in this area, and to describe boat noise, to study the whales movement and strategies during their foraging dives.