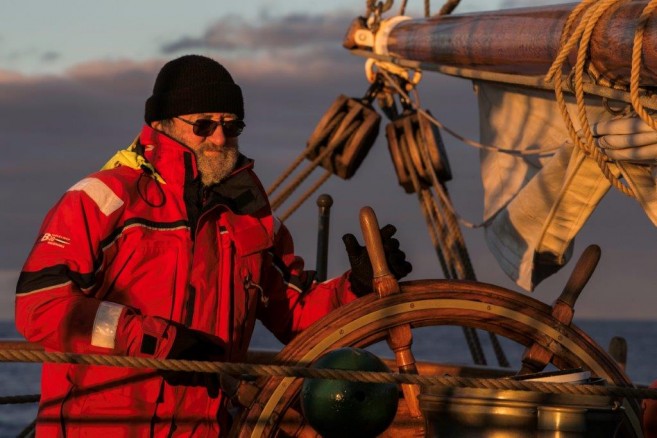 In the early hours of the new day the wind died down, gradually starting to blow a gentle breeze from the SW as we try to keep our sails full. Top gallants and Royals are set again but soon hands are called on deck to clue them up due to the strong gusts associated with passing squalls. At dawn the wind dies when the last night blasts abate. From then on squares are taken away leaving them hanging on their gear. Sailhadling involved some other sail changes on our configuration as the engines are turned on once more. Europa motorsails on light winds under the Spanker, Dekzwabber, Main Top Gallant staysail, Fore top mast Staysail plus the Outer Jib, hoping for fair winds, that never came during the day, actually almost the whole journey is characterized by lack of winds and long W-ly swell. Today, the Drake passage show us his seldom seen gentle windless face. On top of that, during the morning the weather improved, with some high clouds letting the sun shine at times. Later on we make our way under sunny skies, having a beautiful sunset seasoned by the sight of a couple of Fin whales at the distance, leaving behind and a starry night.

Blue skies made for enjoyable watches on deck and the chance to start or continue with some maintenance projects, aloft or on deck, overhauling blocks or sanding equipment.

Such as that was our welcome to Antarctica, as Europa makes her way southbound on waters that experienced a temperature drop crossing the Polar Front. This frontal area where temperate and polar waters meet indicate a biological boundary for the distribution of many species, and now, with surface water temperatures of about 3ºC, definitely we are in the Antarctic system. And as we can almost feel the smell of land and the stench of its inhabitants, the penguins, today it was offered a repetition of the penguin lecture, where we are introduced to their biology, habits and to the different species we might see during this trip. Continuing with the preparations for our first landfalls in Antarctica, we also had to attend the mandatory briefing of the “International Association of Antarctic Tour Operators (IAATO)”. This membership association set up the rules and code of conduct for visitors ashore, to do safe and environmentally friendly touristic operations in Antarctica, in the frame of the Antarctic Treaty agreements.

With our current speed of about 7kn to cover 135nm, the lack of wind and the use of both engines, it looks like tomorrow we will make it to the South Shetland Islands, gate to the Antarctic continent and the last frontier in the planet to be revealed and studied. Even though the existence of a south-polar continent was predicted thousands of years ago by ancient civilizations, including Greek philosophers in the 4th century B.C., it was not until the modern times of the 19th Century when it was actually discovered.

It took time and several expeditions to prove its existence, and after gradual steps in commercial pursuit or with ships being blown out far south by furious storms, finally in 1819 William Smith found the South Shetland Islands. Its discovery could easily have been earlier, but unlucky circumstances didn’t allow Captain Cook in 1772 to catch a glimpse of the White Continent and its neighbor islands. Captain Cook sailing with the two ships Resolution and Adventure, circumnavigated Antarctica and made four unsuccessful incursions south in search of the continent. During his last attempt Cook even sailed as far south as 71° 10’ S between the Antarctic Bellingshausen and Amundsen Seas, but didn’t sighted any land. Anyway reaching this latitude he had sailed further south than anyone before. During the trip he was also the first one exploring, charting and landing at South Georgia Island. A bit further East he discovered the South Sandwich Islands.

Coming back to William Smith, being a merchant Captain doing the route from Buenos Aires to Valparaiso involving rounding the Horn, in 1819 his ship Williams was pushed southwards by furious stormy winds. This event brought him to the sight of the South Shetland Islands on February 19th. At his return he reported the lands sighted and abundance of seals and whales, but nobody gave him too much credit, besides some sailors with sharp ears… So he decided to head south again, now successfully landing at King George Island. And once more he did a third voyage, now accompanied by the British Admiralty Captain Edward Bransfield, just to succeed again and discovering, between other features, Deception Island.

For a fourth time William planned an expedition to the new southern lands, now with sealing perspectives in his head, but at his arrival to the South Shetlands he already found there more than forty British and American sealing vessels. It didn’t take long for them to reach the islands since the first sailors heard about new lands teeming with seals and whales. From then on, it was actually the sealers who discovered many sub-Antarctic and Antarctic places, often kept in secret not to let others know good hunting grounds.

For us, after dealing with the feared Drake Passage, from now on we are on the awe of those early explorers, feeling exited to soon set foot in Antarctica in mythical lands so far unknown to us. But as a difference with them, we count with modern navigation systems, weather forecast and charts (despite still many areas in Antarctica are not completely charted), so we can plan ahead our itinerary and intended landfalls. The route we decided to take first visits the South Shetland Islands, entering the area along the so-called Boyd Strait, a sort of a channel running between Smith and Snow Islands, heading towards the southern shores of Livingston Island. In a good day, the spectacular Smith Island with its 2105m high mountains covered by glaciers can be seen from many miles away, and at dusk, binoculars in hand many try to be first one to spot it. But still with about 100nm to cover it proved to be a bit too far away. Sure tomorrow we will catch sight of land.

We all hope for good conditions to have the chance to sail that route, but in an adventurous trip like the one we are doing, nothing is for granted, there lays also the beauty of it.