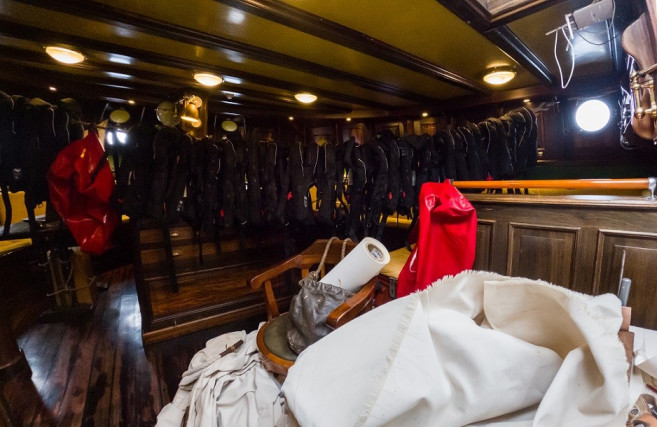 Privateer Sir Francis Drake, famous and feared for his success on raiding Spanish ships sailing back from their new conquests in South America. A name that forever will also be bonded with the open waters between South America and the Antarctic Peninsula, which hold a dreadful reputation of being one of the hardest seas in the world.

His adventures plundering Spanish ships and ports brought Drake to a most celebrated circumnavigation of the globe during the years 1577 to 1580. A trip that increased the accuracy of the world’s geography and provided new understandings of the oceans, coasts and their inhabitants. Those were times when the discovery of Antarctica will had to wait for over 240 years, and when the southern lands of Patagonia were still practically unknown, both their shape and extension to the south.

This expedition counted at the start with a fleet of 5 ships, setting sail from Plymouth, but by October 1578 just one was left, with Drake in command. Amongst the many adventures and struggles suffered during the three years it took to sail around the world, there’s one most relevant for the seas where the Europa sails now. Once they arrived to the Southernmost coast of South America and the Straits of Magellan, a furious storm blew them off to the open waters, eventually finding the end of the southern lands. Tierra del Fuego was an archipelago and south of it there was an ocean. The Americas were not connected to an hypothetical southern continent, the Pacific and the Atlantic oceans met at Cape Horn. It should be possible to sail ships around the bottom of South America. This was the Cape Horn route, eventually discovered later in 1616.

The 6th day of September we entered the South Sea at the cape or head ashore. The 7th day we were driven by a great storm from the entering into the South Sea, 200 leagues and odd in longitude and one degree to the southward of the Strait.
…
From the bay which we called the Bay of Severing Friends, we were driven back to the southward of the Straits in 57 degrees and a tierce.

- Francis Pretty. Crewmen on Drake’s circumnavigation of the world. Account of the historic voyage published in 1910.

450 nautical miles of open seas, the narrowest funnel of the Southern Ocean between Antarctica and the southernmost of the Americas. Here the general flow of water is from the Pacific into the Atlantic, known as the Antarctic Circumpolar Current, is the most voluminous in the world, with an estimated rate of flow between 950 to 1500 million cubic meters per second. The cyclonic systems formed in the Pacific Ocean traverse the passage in an easterly and southeasterly direction. A combination that makes the Drake Passage one of the most renown seas for its swells and tempestuous conditions.

Streaming and rushing along, the evolution of the weather systems is a most important point to consider before venturing on its waters. When and where are the strongest blasts forecasted to hit? How much Westing would be necessary to gain before falling off and aim for the Beagle Channel? Will there be any fair winds for sailing towards our destination? … weather forecasts are the way to plan a route and solve some those questions.

From our departure from Deception Island and probably for yet one more day, Europa deals with those concerns braving the Drake Passage under engine, pushing herself against 20kn of Northwesterly winds. With the Spanker and well sheeted Lower Staysails, she pitches and rolls on the large swells that build up along the Southern Ocean, all to be ahead of the worst weather predicted to come and still have a good chance to set sail for a while once further in northwester direction.