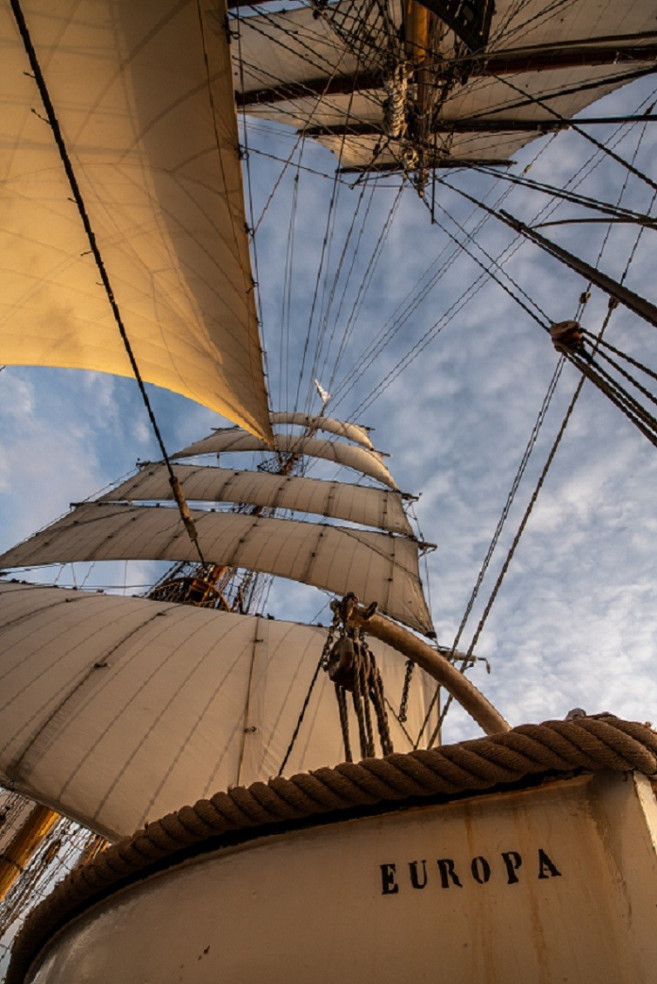 A day of contrasts. Weather, winds and seas play and shift giving a journey filled with a variety of conditions. Pitching and rolling ship as the day start, calms on abating seas later on. The drizzle and low visibility of the morning become clear skies. The fog gives way to a crisp atmosphere leading to the most pleasant evening, including a gorgeous sunset spiced up by a strong Green Flash. If lucky as we were today, in stable clear air, as the sun is about to disappear below the horizon many of the longer wavelengths of its light are cut off while the short wavelengths like the green can occasionally reach the observer.
The headwinds to which we were accustomed to since departure from Antarctica, become Southerlies. Engine work takes a rest and gives a good chance to the power of the wind on the sails.

The most awaited call was heard in the afternoon: We set sail!

Many hands gather on deck, eager to spread canvas to the fair southerly wind. Gradually the headrig and lower staysails are sheeted and hoisted, and all the squares are set on yards braced on broad-reach to port tack. On the wheel the steering still is to gain more Westing. Europa now sails the Drake Passage on superb conditions at a speed of 5.5 to 6.5kn on a good Northwest course. Enjoying the given situation for as long as we can, the weather forecast tells about more changes in less than a day. Hot-tempered in its cold waters, the Drake Passage seems to have ready for the following journeys a whole set of different swings: wind shifts from Southerly to Westerly to Northerly, then backing again to strong Westerlies. Europa, still have a few days ahead to experience the characteristic changeable nature of those waters.