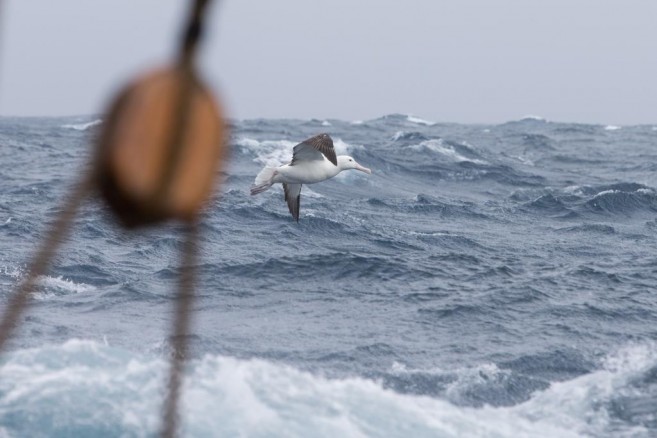 During the night we started setting canvas, up to the Royals and in the Bowsprit up to the Outer jib, also the Gaff topsail, Mizzen top mast staysail and Vlieger.

No staysails set on the Main Mast. During the early morning Port watch had a couple of squall warnings, and higher sails, Gaff and Outer jib had to be taken away and hoisted a couple of times. The wind started veering from the West to the North, allowing us to change course and sail close hauled westwards, the heading that we would like to keep for the moment. We try to sail all the time close to the wind, which is blowing between the N and the W, and we use the tack more favourable to gain mileage towards the West. Under this conditions all sailhandling is mostly based on setting and taking away sails depending on the wind strength and direction but keeping the ship braced on close-hauled to Starboard tack.

These relatively favourable conditions lasted till the morning when we are steering West under NNW winds of 15 to 20 knots. The effects of the current that we had yesterday pushing us to the SE are less important on the area where we are now, and we keep a speed between 4 to 5 knots. But soon, around 11:00h the wind starts blowing more from the NW and then from the W, backing 45º in around half an hour. With this, our course keeps changing as well, trying to keep the ship 60º to the wind, and gradually turning Southwards.

In the meantime some squalls and showers approached us, and we take precautions, like dropping the Vlieger, preparing Desmond to be replaced by Monkey, and Ballantine Royal and Outer jib halyards, in case they have to be dropped in a hurry. But at the end we can see that they just bring a bit of drizzle, and even set the Flying jib.

Anyway the wind and weather are changing, so we keep the lines Ballantine on deck and we remain on standby, while steering 60º to the wind. From a cloudy morning the sun starts shinning, signal also for a probable wind change. Sailing in the Drake Passage instead of going North it may look like not the ideal situation to accomplish our goal, but anyway our actual position is North of a low pressure system that brings stormy winds on the Southern Patagonia Pacific coastline. So the weather here looks much better than further North. We still wait for a good chance to wear ship soon and start heading Northwest, whenever would be possible.

In the afternoon the wind keeps backing, becoming SW. Moment to wear ship and start heading North. But at the same moment when Port watch starts wearing ship, the wind picks up over 30 knots, 2 bells rung and all permanent crew jumped on deck to take away canvas, furl and brace sharp to Port tack. After a hectic hour we find ourselves sailing on a Northwest course, just under Mizzen, Monkey, Lower topsails, Fore-topmast staysail and Inner jib.

During the night we keep on a NW-ly course with strong wind between WSW-SW and hale squalls, we need a bit more push so the Courses are set under difficult wind, sleet and swell conditions on deck. Cape Horn, Drake Passage and entering the Southern Pacific Ocean are showing their wild face, and looks like the conditions will remain or get even windier for tomorrow. It will be the moment of the truth; will we get enough towards the West to sail around the southernmost tip of South America and up the Pacific?

In the last 24 hours we sailed 92 nm on a 215º course. Cape Horn lie on a 28º direction from us at 158 nm. During yesterday and until today in the evening, exceptional numbers of Royal albatrosses fly around the ship. Normally using more common routes on the trips to Antarctica, East of our actual position, and crossing from South America to Cape Town, it is possible to spot a few of them, but on this part of the Drake Passage and its confluence with the Pacific, where less ships sail, it has been surprising to see them by tenths at the time, continuously during this period of time Also a beautiful and elegant Light mantled sooty albatross fly with us for a couple of hours. With a circumpolar distribution, the closest nesting areas to our position are located in South Georgia.