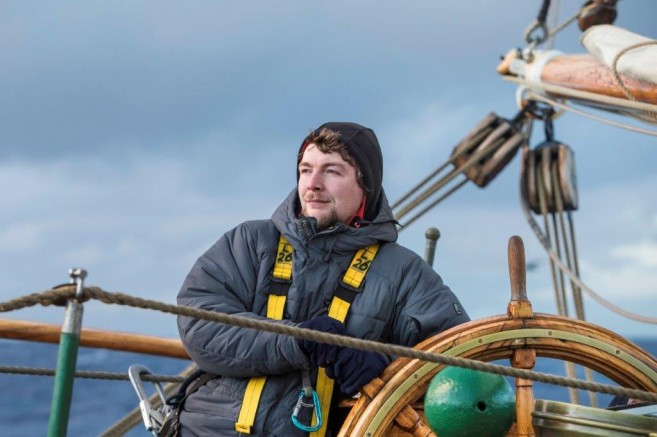 We are welcomed to our first day in the Drake Passage by a sunny
morning, after a dreadful seasickness night for some of us.
During the early hours of the day more canvas is added to the sail
configuration, enjoying a few great sailing hours. Like this, by the
time we have breakfast we are braced sharp on Starboard tack and all
Square sails are set, together with the Fore Top Mast Staysail, Inner
Jib, Middle and Lower Staysails, with the exception of the Dekzbabber.
Steering on a 165º course under general WSW winds of about 20kn we keep
a speed between 5 to 6kn. Several showers strike us on our way, with
their associated shifting winds and rain.
The motion of the Europa keep many of us seasick or at the verge of
being, so during the morning just the people on watch wander around and
stand on their positions steering the ship or doing the lookout.
Eventually a few of us found a new best friend on the yellow buckets
distributed for the seasickness purposes, accompanying us wherever we go
around the ship.
The situation seems to gradually improve during the day, as we get used
to the watch system and slowly acclimatise to the ship’s movement. But
still with the few people around in the morning we managed to take away
and furl all the square sails that were set, adapting to the 30º
windshift experienced, in fact following the forecasted weather. Now it
started blowing from a SW and SSW direction, almost at our nose. Engines
roar while we motorsail under the Spanker, Lower and Middle Staysails
plus both the Fore Top Mast Staysail and Inner Jib.
The better conditions in the afternoon allowed Belén to give a talk on
“Science on board” where she briefly explained the importance of
supporting science in Antarctica and the role that Europa has as an
opportunistic platform for wildlife data collection. This activity
includes location and pictures of the sighted species (birds and marine
mammals) that can be used later on for photo identification projects
like “Happy Whale” and others. This research is important to understand
biological aspects of the species such as their migration patterns
distribution or abundance, but also for assessing human impacts and
climate change. Further she explains the use of the hydrophone and how
to take acoustic recordings of wildlife during the voyage for
educational and scientific purposes. The main aim is to explore about
the mysterious and poorly known vocal sounds produced by the marine
mammals in their Antarctic feeding grounds.
Later on, during our daily meeting after diner, Captain Eric talked
about the weather expected for the next hours (still SSW-ly winds
belonging to the back of a Low-Pressure system passing along between
South America and Antarctica) and our 125nm progress during the last
day. At the moment still 350nm to cover until arrival to South Shetland
Islands, sailing through the treacherous waters of the Drake Passage.
This famous stretch of water is named after the legendary and
experienced sailor Sir Francis Drake, born in Tavistock (Devon) sometime
between 1541 and 1543. Amongst many adventures, his successful
circumnavigation of the world during the years 1577 and 1580 ensured
that he would be one of the best remembered figures of England.
Eventhough some regarded him as a hero, he was distrusted and feared by
others, mostly the Spanish fleet as England was at war with them for
much of Drake's life. Understandable feeling as one of his assignments
was to look for Spanish ships sailing back from their new conquests in
South America. Extremely attractive catch as they were laden with gold
and silver.
Besides these belligerent activities, his world circumnavigation helped
to give a more accurate picture of the true geography of the planet.
During the course of this voyage, he was blown out further South of the
South American tip, thus discovering that Tierra del Fuego, the land
seen to the south of the Magellan Strait, was not part of a southern
continent as had been believed previously. Francis Fletcher, the
chaplain on Drake's ship described it like this: “In passing along we
plainly discovered that same Terra Australis to be no continent, but
broken islands and large passages amongst them...”
This meant that the Pacific and the Atlantic oceans met at Cape Horn. It
should be possible to sail ships around the bottom of South America.
This was the Cape Horn route, eventually sailed by the Dutch Schouten
and Le Maire in 1616.