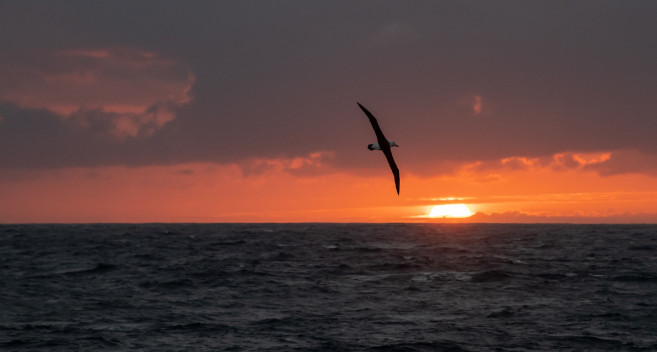 Europa starts facing the open waters off the Antarctic Peninsula on her way to Ushuaia. A day of motorsailing until the fair winds blow in the evening.

A fantastic farewell to our activities in Antarctica, a good evening at Neko Harbour. Then it was time for the beginning of the journey northwards. Ushuaia lays over 600nm away, most of it on the open waters of the latitudes between the Shrieking 60’s and Furious 50’s. For a good passage, a good follow up on the wind forecast is necessary. Predictions that tell about wind directions, calms and gales. A tool of utmost importance on the voyage planning. When to start or when to leave with fair winds, when to speed up is needed to be ahead of the foul weather. What to expect, when to be ready for a shift. With all that in mind, we have our last look at the Antarctic lands before enjoying a good night of sleep in preparation for the start of the watch system in the morning.

First crossing the Gerlache Strait, then making way between Brabant and Anvers Islands, still in relatively sheltered waters. Our way north departs from further south than the South Shetland Islands, making for a longer passage.
Leaving the coastline behind, Europa faces the open waters off Antarctica tied up to her engines. Northwesterly winds blow on her nose from departure while as he gains a bit of Westing in preparation for the winds in the Drake Passage. She finds herself in the open ocean in the early morning, then the swell and rolling can be felt one board. Head-rig, Middle Staysaills and Spanker are set to help having a more stable ship. It was not until the evening, during the sunset when she starts spreading her wings to the shifting winds. Likewise numerous Black browed albatrosses start to glide along. With them a beautiful Grey headed fly by and not much later an elegant Light mantled follows. White chinned, Cape and Giant petrels join them. Sailing over the area where the continental shelf dips into the abyssal depths, several tall blows are spotted around. These are the preferred zones for the large Fin whales.

The Southwesterly good breeze starts to blow and gradually increase, time for climbing aloft and unfurl Topsails, Top Gallants, Courses; sheet them home and hoist the yards. Engines soon become silent and Europa sails again back to Ushuaia, on her first full day at sea after the time spent in the Antarctic Peninsula.