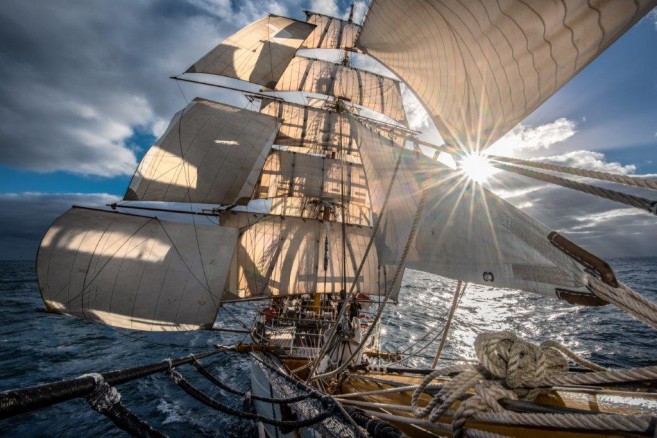 The nice and speedy sailing under fair strong and moderate winds seems to have reached the end for the moment. Before sunrise the wind started to ease, blowing up and down 20 to 10kn, shifting between SW-ly to S. First thing we do is brace a point sharper and set more canvas. Spanker and Gaff top sail are readied and hoisted. But under the variable breeze we still had to brace back and forth a couple of times, and by breakfast we sail between Broad reach and Square. Still some more sailhandling to be done before the morning change of watch, setting the Fore Top Mast Staysail and stretching the Courses on the Whisker Poles to catch as much wind as possible.
Black browed and Wandering albatrosses seem to know that during the morning and until half of the day they will still have some good breeze to glide and soar over the waves, last chance to catch a morsel or pay us a visit before the conditions calm down. Then all those large Ocean wanderers will have to spend lots of energy flapping their wings or better sit and wait for more favourable conditions. Giant, Spectacled, White chinned and Soft plumaged petrels also spotted today, seem to be of the same opinion. The tendency of the wind to decrease kept going on during the morning, and as we steer almost downwind on a 050º course, time had come to set additional canvas. Crew has been busy during the last days rigging Studding sail Booms, halyard blocks, sheets and ropes and now is all ready to put them in use.
On the Europa we actually have six of those Studding sails. When sailing with the wind from the aft or in Broad reach we can set them in the Fore Mast, up to three on each side, or on the Main, two on each side.  The general idea is that they work just like a square sail, with two sheets to pull their corners down, a clewline to haul the corner up, a halyard to hoist the whole business, and a downhaul or tack to bring it down again. The only difference is that the sail has to travel a long way: from down on deck all the way up to its spot next to the yard, flying like a kite. With the wind we had, the fittings ready and the sails available, during the day we try to set three of them on our Starboard side. The crew gave an explanation on how to set them and many gave an excited hand to pull them up. First ones are the the Lower and Middle that come up before lunch. But during the meal the tip of the Passery-Boom dips into the water during one of rolls on the easing swell and surfaces showing a rip on the Lower Studding sail corner. Before things go worse, the crew hurries to bring the sail down. Just the Middle one remains set for a while, but shortly afterwards it is replaced by the one that is prepared for Port side as they are interchangeable, followed by setting the Uppermost one. To allow more of the wind to reach the Fore Mast sails, we clew up starboard side of Main Course. The Studding sails allow us to make a bit more speed on this relatively quiet day under following light airs. We try to keep the progress under sail as much as possible, nevertheless the slackening winds are slowing us down and we still have to cover over 750nm to Cape Town.

A look at the wind forecast shows that we are actually getting closer to the centre of a High Pressure System, where the breeze becomes lighter and variable. All indicates that soon the engines will have to help on our progress once more, after a whole week of great sailing conditions. And indeed, late at night the engines roar again while Royals and Courses are clewed up as the light air was just helping us advancing at less than 3kn of speed. Several activities kept happening on board during the day. Of course the thrilling new happening of learning the “How to…” and then set Studding sails, but the calm sea and fading winds allowed also our engineer Greg to start showing some of us the lower compartments of the ship.  Many were curious about how are they and what is actually happening in the ship’s “dungeons” such as the engine room, dry stores, chain locker, switch room and the like. Well, today we had the perfect opportunity to go down for some exploration on to those otherwise “off limit” areas. After his explanations about what the compartments are used for, how the engine, generator, water system work, of course, he patiently answered all our questions. Now we all realise better and appreciate the work that Greg has to go through on daily basis and sometimes in pretty difficult conditions to keep the ship’s vital systems running so we can enjoy our voyage to the fullest.

Following the Navigation talks that our Captain and Officers are offering, plus the broadcasting of the Docs-Movie “Longitude” in the lounge for the last couple of days, today Merle introduced us to the truly amazing world of Celestial Navigation. Methods that had lead seafarers across the vast oceans for millennia, until nowadays when the electronic and digital revolution made our lives easier with the use of the GPS.
The older method to estimate positions while sailing was just based on dead-reckoning, where the current position is calculated by using a previously determined one. From there and knowing our speed and course over a period of time we can estimate our new location. This process is subject to significant errors due to many factors as the speed and direction must be known precisely at all times. Astronavigation came as an aid for more accurate positioning. This technique is based on taking “sights” calculating the angle between a determined celestial body (most commonly the sun but also are usable the moon and many stars) and where its zenith (highest point in the sky) projection hits the centre of the earth. What we actually measure is the angle of the celestial body to the horizon and the rest can be done using conversion tables and mathematical procedures.
At a determined time the celestial bodies are located over one point on the planet’s surface, which latitude and longitude is known as the “celestial body’s geographic position” and is listed on tables on the Nautical Almanac for that specific year.
The easiest “sights” to take and most utilised from the old times are the “noon sights” of the sun and the use of the Polar Star. The most important celestial body for positioning was the Polar Star. It always indicate the North, and its angle to the horizon gives us the Latitude.

On the other hand, taking a “sight” when the sun shines at its highest (noon position), gives straight away a latitude line (the Sun at its highest indicates the South on the Northern Hemisphere, and the North on the Southern Hemisphere) To calculate the Longitude we need to know the exact time when a celestial body projection hits the earth’s surface in a specific time. That was a real problem for many years until accurate chronometers and watches were invented and made available to bring at sea for long periods of time and in any kind of weather and rolling conditions. Many tried to build such devices but one name stands out between them: John Harrison, that finally got the mechanical solutions to manufacture this long-sought Marine Chronometer, first successfully tested on a long sea voyage in 1761. With accurate positioning came also the elaboration of precise maps and charts, widening the horizons for exploration and long distance ocean journeys. How amazing it is to realise that celestial bodies like the Sun, Moon and Stars, shinning from seemingly unfathomable distances from our planet, can be used to fix our position in any given point of the earth surface!