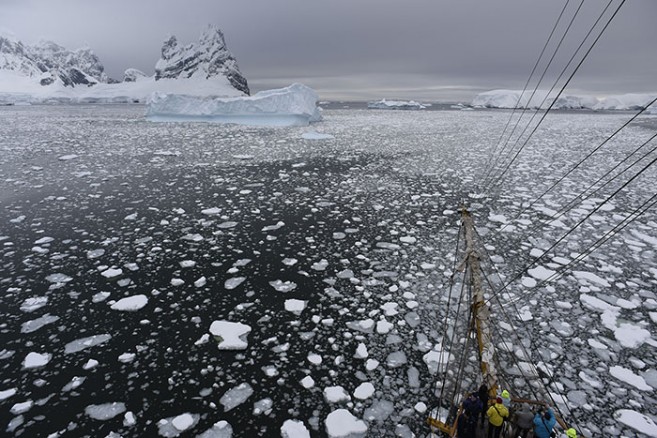 Today is a white day, a wet day, a good day. Early in the morning we pass through Eclipse point. This small, unsurveyed passage is filled with icebergs and an impressive sight. It is still clear, we can see the two basalt towers at Cape Renard. They are almost 750 meters high and informally named 'Una's Tits'. Una was a woman living in Stanley who was working as a FIDS (Falkland Island Dependencies Survey) secretary. She often was the last women the FIDS men saw before leaving for Antarctica.

While we are having breakfast the fog settles down, and Lemaire Channel looks pretty much like the open ocean in fog. During the morning the snow slowly gets a little more dry and the air a little more clear. We can now form an idea of what the steep mountain sides must look like – they reach up to 1500 m.

In the afternoon we land on Winter Island. It is still snowing and the name seems to be most perfect for this place. The snow is quite deep and not that easy to walk through – at least for the first person, which happens to be the person writing. After sweating through the snow for a while we all reach the old black house. This house was the start of the station in 1947; Wordie House. It was active until 1954, when the British station was moved from Winter Island to Galindez Island and called Faraday station. Since Skua Creek and Stella Creek still have a good amount of sea ice, we cannot be picked up here, but make our way back through the snow. Blacky and Grey come to bring us to Vernadsky station. The rest of the evening will be warm and dry – we spent it sipping vodka in the southernmost bar of the world and dancing on deck during Europa’s famous Braai.