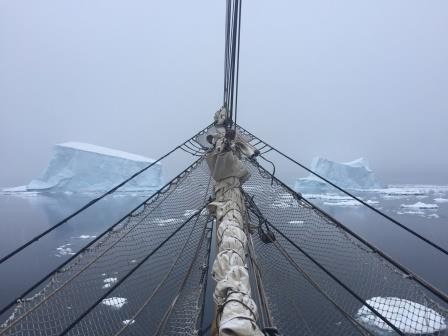 Even so, there were so many astonishing sights to process from our brief time in the Antarctic - the brilliant glacial and caldera hikes at each of the six landings, the ever-vibrant wildlife, the massive icebergs painted below the surface in that wondrous electric blue. I keep trying (and failing) to remind myself exactly where I am on the map, wandering among these impossible islands, on a sailing ship covered at times with a thin layer of snow.

It has been two weeks, but seems longer. Perhaps a function of the watch rotation breaking days into four hour chunks, perhaps a function of our almost complete disconnection from the world at large. Only limited information from outside filtering through... word of Stephen Hawking's death at 76 and Theresa May's musings about Article 51. Happy news that Bill is now a grandfather for the first time, and that Arsenal is through to the Europa QF. It is quite enjoyable to be mostly oblivious to everything else.

After our landing at Brown Bluff, and so on the Antarctic continent itself (the 7th for many of us), thoughts have begun to turn even more directly to Shackleton's Endurance. Elephant Island is only a few miles off as I type, and then we follow the James Caird's route to South Georgia - a planned 8 days or so for us, in far more palatable circumstances, compared to Shackleton's 16. "How?" is a question that comes frequently to mind. And yields no real answer.