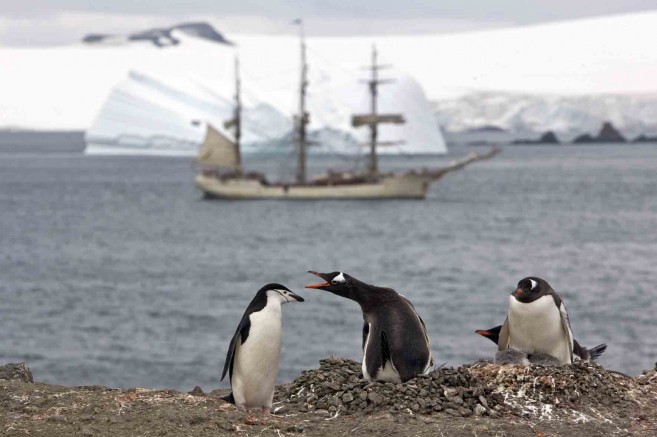 Well, I don't know were to start. We have probably had our last (for this time...) landing in Antarctica, namely a refreshing walk on Penguin Island with it's penguinnest and craters, just southeast of King George Island, South Shetland Islands.

Tonight at 02.00 we plan to heave anchor and head for Elephant Island, at least have a glimps of it. After that we start out for South Georgia. The wind is said to back from a more westerly direction, which would give us better direction for sailing but, as ever, we'll just have to wait and see. The Wedell sea and all af the Antarctica landings have been beautiful. a bit frightening, interesting, overwelming etcetera. A lot of more adjectives could be added. All the time we have also been aware, as much as you can be, being creatures of another time, of the hardship men of gone times have endured here. The most common names for us have been Shackelton and Nordenskjold as we have partly follow there paths, though missing Snow Hill Island in the south. But we got to 64 degrees south plus a little, and I must confess I was a bit relieved to head north again as the new winter's ice was starting to grow already! I am not a Nordenskjold nor a Shackelton!

Seals of many kinds, mostly furseals, penguins of many kinds (chinstrap, gentoo, adele), petrels and albatrosses also seen and studied, but I am not the person to write on the animalsubject. I am just very happy to
have had the opportunity to watch them and all the amazing icestructures in different white and blue colours, forms and shape! So, later tonight maybe off to Elephant Island, and then about a week's seavoyage!