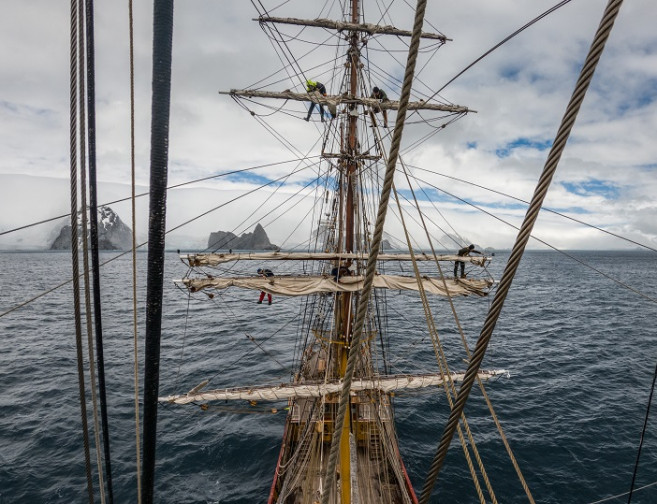 Overnight light winds and calm seas, although still feeling the long big swell that grew during the last windy days, made for motoring and gradually get to Point Wild, at the northern coast of Elephant Island. As planned, right before breakfast the anchor goes down at the majestic cove right West of the small rocky headland where 22 men of the Transantarctic Expedition led by Shackleton spent about 4 months waiting for rescue.

Glaciers, cliffs and mountains surround the Europa, revealing their untamed beauty in the calm and sunny hours at the beginning of the new day. For the ones already out on deck, the good views over the barren and jagged landscape give an idea of how harsh the environment and the conditions can be here, along the severe looking coasts of Elephant Island. A feeling that quickly grew bigger when soon the cold winds shooting down the glacier in front of us started to blow and gust. While we could see the relatively clear skies overhead, low clouds rapidly grew atop the glaciated island and its high peaks.

At this spot we connect our journey with yet another great chain of events and quest for survival, the Ernest Shackleton most known Antarctic adventure. His idea of a Trans Antarctic Expedition, from the Weddell to the Ross Sea via the Pole, started once the goal of reaching the South Pole was achieved by Amundsen in 1911. But in 1914, after their departure southwards from South Georgia, it didn’t take long until their ship, the Endurance got beset in the Weddell Sea ice. She got crushed by the ice and sunk, making for her 28 crew to survive on the ice floes for a year and a half until touching solid ground under their feet on April of 1916. Aside of a scarce few square meters where to set camp and a short number penguins and seals left around the area before they disappeared at sea until the next spring, Elehant Island doesn’t offer any comfort. Rocks and big swell, calving glaciers, shallows around the coast and no means for salvation, Point Wild proved to be another challenge for them.

In the changeable weather, now under sunny skies, now snowy, now windy, then windier, we steer both our inflatable rubber boats on a cruise around the whole area. From a glacier front, then through the narrow channel between the main island and the steep one called Gnomon, the ride brought us to the spot where those harsh men clung to life for so long. The so called beach is a survival miserable place. Narrow rocky shore, home for penguins and seals, joining a small headland to precipitous rock and ice cliffs, lashed by gales and frosty spray.

The freezing katabatic winds that don’t stop during our activity, made for some to feel the chill eventhough we all wear modern warm and waterproof equipment. Hard to imagine how it was about 100 years ago, dressed for months and months in canvas and wool garments, sailing, rowing, camping and pulling sloops on the ice, and finally disembarking on such a wild setting. And indeed the spot looks and feels wild, but it is not because of its appearance that bears such name, but it is after Frank Wild, the man left in charge of the stranded team. In the meantime, Captain Worsley, Shackleton and four other crew members set out at sea on the James Caird, a refurbished small open boat  in which they fought the storms and gales of the Scotia Sea for 16 days before reaching South Georgia in search for help.

As we could see form closeby, nowadays the rocky point shows a sculpture of Piloto Pardo, the Chilean Captain who finally could rescue the marooned party on the ship Yelcho. Although starving, tired and frostbitten, not a man was lost.

Moulting Chinstrap penguins are ubiquitous and of course Fur seals occupy the shore as well. A shy Leopard seal shows up for a few moments and on the rocks awash Snowy sheathbills look for something to eat.

A stranded iceberg on the nearby rocks offers a good end to our zodiac ride in such exceptional lace.

Back on board, katabatibc winds continue blowing. Anchor is heaved and crew starts preparing the ship for the sea days to come. Safety lines are tied and safety nets are stretched along the ship at the Main deck. As the ship gets some distance from the rugged coast, wind starts dying down. Time for climbing aloft and unfurl some canvas. Top sails first, then Top gallants, Lower staysails, all the head rig and Middle staysails too, soon they try to catch the light breeze left offshore at the shadow to the island.

A bit further away, white caps and a change on the appearance of the sea surface indicates that there is actually wind. A bit of engine push brought us there. From then on the fair SE, SSE wind start blowing a good 20 to 25kn, offering once more an exciting sailing experience. 6,7,8 even 9.5kn show the computer screen in the wheelhouse, where position and our straight course to South Georgia is plotted.

We enjoy following our son's sailing trip with this highly interesting logbook.