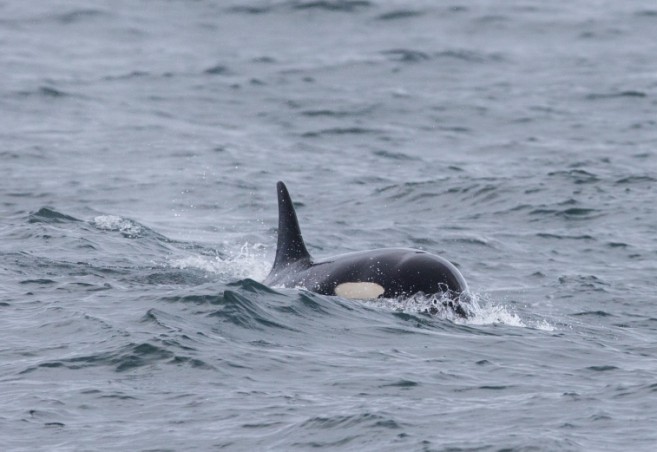 In the morning we start being under the effect of the tail of a Cold front passing by, bringing us variable winds in direction and force. With a tendency to back from the Northerly direction towards the West, they keep us busy during the watches taking away and setting sails again. Until the afternoon when it starts blowing from the direction we want to sail to, it becomes SW and we wear ship changing our course to the NW, again waiting for the wind to change.

Later on, during the night the wind picks up to over 30 knots, and slowly keeps backing. We keep our course as close to it as we can, slowly turning from a NW course to a WNW course, ending up making a loop, crossing in the night our track of the afternoon. We keep getting closer to land. In fact we have been just around 20 miles to the Argentinean Patagonia coastline. We can realise land proximity and relatively shallow waters by the strong tidal currents that we are experiencing, affecting our speed. The colour of the water also changes and the wildlife around the ship as well. More coastal species are visiting us, like Skuas, Kelp gulls, and a lonely Snowy sheathbill that uses our rigging to take a rest. We can see it flapping its wings constantly, with its stubby rounded body, not palmed feet, and short wingspan we can see that is not really an ocean wanderer. Even being something in-between a coastal and a sea bird this species can fly all over Patagonia and all the way to Antarctica, where they also breed and hang around the penguin colonies and human bases, acting like the “cleaners” of those areas, scavenging on carcasses, eggs, garbage, penguin poo, and even stealing food from the penguin’s beaks as they try to feed their young, stealing eggs and recently hatched chicks as well.

We had several sights of marine mammals too. Small groups of Peale’s and Dusky dolphins visited us, and a group of Orcas composed by a young male, a couple of females and a youngster is also spotted in the distance. They seem to be on a feeding mood, as they swim pretty fast in circles, and many petrels are around checking for leftovers and by-catch.

I love these log reports. So interesting. Keep them coming. Thankyou.